Capitol Hill Cubans reveals that the “Cuba Experts” so often quoted by the media as the sages of all things Cuba are experts alright: Experts in lobbying:

Reuters’s Havana bureau has put out a one-sided story on “experts” warning that the U.S. needs to engage the Castro regime on oil drilling.

So who were the (three) experts consulted?

They were anti-U.S. policy activists Robert Muse and Phil Peters, who use any issue (excuse) to lobby against sanctions, whether it’s oil drilling or selling chicken parts.

(Note to Reuters: These aren’t unbiased “experts,” so it’s disingenuous to conceal their activism.)

And of course, Jorge Pinon, the former BP-Amoco oil executive on a decade-long quest to facilitate oil drilling for Cuba’s dictatorship.

(Note to Reuters: It’s disingenuous to conceal that Pinon is a former oil executive with an agenda.)

These are some of the same “experts” that five years ago were warning U.S. lawmakers that the Chinese were speculating off Cuba’s coasts. And thus, using it as a ruse to lobby for the U.S. to lift sanctions — so American oil companies could “beat them to it.”

Back then, Dick Cheney famously fell for the “China ruse” — and consequently had to retract.

As we all know, the Chinese never drilled.

For these “experts”, preventing Castro from drilling is not an option — as the Reuters story reveals:

“[T]he administration has not taken what many experts consider the most critical step — meeting directly with the Cubans to develop joint safety regulations and protocol.”

Here’s the troubling reason (or despite the fact that):

“‘It goes without saying that energy independence is critical for the political and economic future survival of the island nation,’ said Jorge Pinon, an expert on Cuban oil at Florida International University.”

(Sadly, Pinon has even adopted the Castro regime’s insulting lingo of equating itself with the “island nation”.)

Basically — because “energy independence” is key for the survival of the Castro regime, particularly as “Chavez dependence” becomes increasingly unsustainable.

How’s that for an agenda? 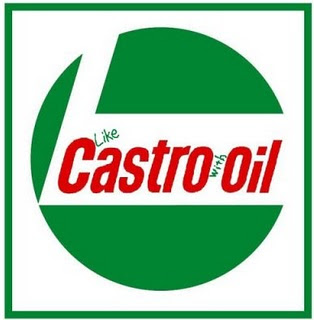