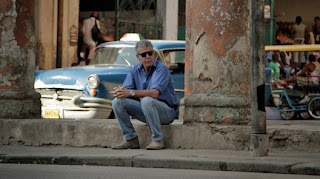 I have watched and enjoyed Anthony Bourdain’s show No Reservations for years now, and I have to say I felt a little trepidation when I heard he would be doing an episode in Cuba. Bourdain is kind of a jerk — which to me makes his show entertaining — and I wondered if his jerkiness would get the best of him while exploring Fidel Castro’s Caribbean slave plantation. Considering the fact that Bourdain’s somewhat narcissistic demeanor is part of his charm, I wondered if an insensitive and callous portrayal of Cuba on his part would leave me outraged and indignant.

Well, after finally watching the show last night I was left feeling neither outraged nor indignant. Instead, I was left with an odd combination of emotions: relief and disappointment.

I felt relief for the fact that Bourdain did not ignore the reality of life in Cuba, and the injustice of living in a totalitarian society where residents are treated as second-class citizens. Unlike Food Channel host Andrew Zimmern, who in 2009 filmed a show in Cuba where he ate barbecued tree rats without ever mentioning why Cubans are reduced to eating rats, Bourdain posed some difficult questions to the regime’s handlers that accompanied him everywhere. While enjoying gourmet meals in regime-owned restaurants, he asked them to reconcile how the regular Cuban could never afford to eat in such a place. He mentioned the scarcity of food , the scarcity of freedom, and the constant surveillance the average Cuban has to endure. The questions and comments made his handlers visibly nervous, and you can tell they were not on the list of discussion topics approved by the State.

My disappointment came when he never pushed it further than a question or comment. I understand Bourdain is not a democracy or human rights activist, and he is under no obligation to take on the cause for a free Cuba. I did not expect him to have a conversation with Dr. Oscar Elias Biscet, or invite Antúnez to a meal of lobster and steak at a State-owned restaurant. But after coming so close to pushing it over the top, it would have been nice to see him surprise us, and the regime as well.

In the end, Anthony Bourdain’s Cuba episode managed to avoid egregious provocation of either side of the debate. He did say some things that the Castro regime is certainly not happy about, and on the other side he made some ignorant statements on Fidel and Cuba’s healthcare and education. But none of them in my opinion rose to the level of outrageous or callous.

So I remain both relieved and disappointed: relieved that Bourdain did not allow his show to become another propaganda piece for the regime, and disappointed that he did not take full advantage of this opportunity to fully expose the injustice and misery suffered by the Cuban people.

Bourdain had no reservations in Cuba, and no provocations either.

7 thoughts on “Anthony Bourdain in Cuba: No reservations, no provocations”