Capitol Hill Cubans breaks down the numbers the Castro regime provides regarding the number of Cuban Americans who visit Cuba. As with all figures from the Cuban dictatorship, dubious is the best you can hope for. Most often, however, they are simply farcical.

In January 2010, the Castro regime’s Foreign Minister, Bruno Rodriguez, hosted a forum on “The Nation and the Emigration.”

It’s a propaganda event held periodically in Havana, which seeks to relay the “image” that Cubans abroad do not oppose the Castro regime. So they recall 200-300 of their favorite “vetted” Cubans abroad and stage a whole production.

At that event, Rodriguez announced (with great fanfare) that 300,000 Cuban-Americans visited the island in 2009 — pursuant to the Obama Administration’s easing of U.S. sanctions.

Rodriguez “unveiled” this figure — courtesy of the regime’s National Statistics Office — as part of his argument that only a “radical minority” of Cubans abroad oppose Castro’s dictatorship.

Since that speech, the 300,000 figure has been routinely regurgitated as the “official” statistic of how many Cuban-Americans are traveling to the island.

Every news story written about Cuban-American travel now parts from that base figure, with “estimates” proportionally increasing over time.

But here’s the problem.

Undoubtedly, there’s been a dramatic increase in flights from the U.S. to Cuba. There are currently anywhere between 30-50 flights on any given week, with each flight carrying 100-150 passengers.

Any variant of these flights times passengers per week can equal 300,000, or more, or less, passengers — but the key word is passengers.

Unwittingly or not, the most consequential part of President Obama’s new policy was allowing for visits by Cuban-Americans to be unlimited. In other words, for Cuban-Americans to travel back-and-forth to the island, as if Cuba was The Bahamas — or to essentially live on-and-off the island.

(Ironically, it would be much more difficult for Bahamians to travel back-and-forth from the U.S. to The Bahamas — than it would be for Cubans to so — as they don’t enjoy the same generous U.S. immigration policy.)

Anyone that has traveled through Miami airport knows that current Cuban-American travelers are not doing so only once a year.

Take the recent New York Times story on this issue. One of the Cuban-Americans profiled had traveled eight times in the last 18 months.

Of course, that’s not useful for Castro’s propaganda.

Which begs the question —

Are Cuban-Americans traveling to Cuba multiple times a year — while extending a financial windfall upon the Castro regime — defying both the generous refugee presumption, and the humanitarian intent of family visits, as granted to them under U.S. law?

Do these 150,000, or less, Cuban-Americans have the “right” to help finance the repression of 12 million Cubans (most of which have no family abroad)?

“The right to swing my fist ends where the other man’s nose begins.” 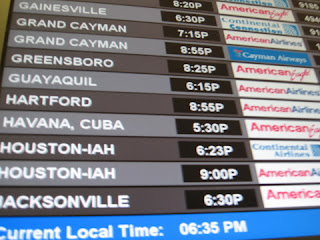