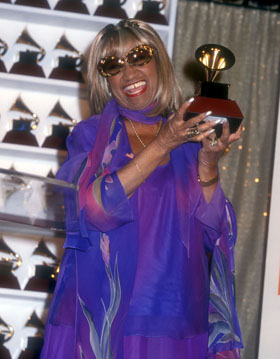 MIAMI – Hundreds of fans of Celia Cruz are expected to flock to locations associated with the late music icon Saturday to mark the eight-year anniversary of the singer’s death.

In a statement released Friday by F&F Media Corp., a mass will be held at Saint Raymond Catholic Church in Coral Gables, where the Queen of Salsa will be honored.

Fans are also expected to gather at the legendary Cuban singer’s modest mausoleum at Woodlawn Cemetery in the Bronx, which she shares with her husband, Pedro Knight, who died in 2007.

Fans may find a few family photos, rosaries and a Cuban flag resting on the singer’s resting place when they peer through its windows.

“It was specifically designed so the fans can look in,” Susan Olsen, the historian for the cemetery, told the New York Times. “Someone comes in on a regular basis, cleans it out and changes the photos so there’s always something for the fans to see. It was totally thought out.”

Apart from the pictures of the couple and a small portrait of young Cruz, the rear wall displays a stained-glass window depicting Cuba’s patroness, La Caridad del Cobre.

Olsen said setting of the couple’s mausoleum near an intersection with a small path leading to the front door was designed to be considerate of others.

“It was positioned so it would not intrude on other people’s lots or ruin the grass,” Olsen told the newspaper. “People might say it was arrogant to expect so many visitors, but it was anything but arrogant. We get people who come from all over the world who come to see her.”

Known as one of Latin music’s most respected vocalists, Cruz died at her home in New Jersey in 2003 after failing to recover from a brain tumor operation.

Omer Pardillo, President of the Celia Cruz Foundation, which continues to raise money for underprivileged students wishing to study music, said he remembers Cruz as a great philanthropist.

“She was a lady who was always interested in supporting good causes and never hesitated to show gestures of solidarity with the needy.”

In memory of the singer’s life, a coffee table book is in the works to showcase photographs taken of Cruz’s extensive collection of shoes.

One of Cruz’s favorite shoes – a pair of gold vinyl platform shoes designed by Mexican shoemaker Mr. Nieto – are on display at the Smithsonian in Washington, D.C.