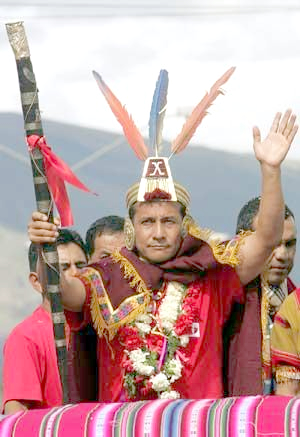 Peru’s newly elected president, Ollanta Humala has made his pilgrimage to the mecca of Latin American despotism, Havana, Cuba to pay tribute to his master and receive his instructions. While there, he will worship at the altar of Castroism, and will be anointed by Raul Castro with the blood of tens of thousands of men, women, and children throughout Latin America who have been murdered by the Castro regime’s communism.

The leftist Pervian leader’s visit comes at the same time Venezuelan President Hugo Chavez is in the Cuban capital for chemotherapy treatment for cancer. Mr. Humala was once seen as an ally of Chavez-style socialist politics but has recently played down his ties to the Venezuelan strongman.

The Cuban official daily Granma said Mr. Humala would hold “official talks” with Mr. Castro and had other activities planned, including a possible meeting with former president Fidel Castro.

Mr. Humala, who takes office July 28, arrived in Havana from Mexico, where he met Mexican President Felipe Calderon as part of a tour of the region that began after his election victory June 5.

He has been to Venezuela, the United States, Argentina, Bolivia, Brazil, Chile, Colombia, Ecuador, Paraguay and Uruguay.

Humala is in Cuba, and now Cuba will be in Humala. May God have mercy on the Peruvian people.

1 thought on “Humala in Cuba, Cuba in Humala”