The much ballyhooed “reforms” of the Castro dictatorship continue to wreak havoc across the island as another independent journalist is arrested and detained by State Security. 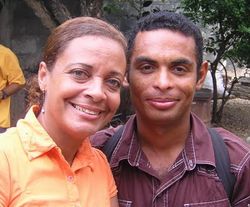 Cuban independent journalist Yoandris Gutiérrez Vargas has been in police custody since July 10, when he and his wife Annia Peralta Zapata were detained while on their way to church.

“You are detained! We have orders to take you in,” two police officers told the couple as they were heading to the Baptist church in Bayamo, where they are members, according to a report published by the CIHPRESS news agency for which he is a correspondent.

Peralta, an activist with the Federation of Latin American Rural Women, reported they were taken to a police station outside of Las Tunas — along with members of political prisoner Ariel Arazuaga’s family — and that Gutiérrez, a former political prisoner, was later transferred to a jail outside of Santiago de Cuba.

Gutiérrez has served at least two prison sentences, including one year in 2006-07 after he hung an altered Cuban flag — the white stripes, he turned black as a sign of mourning, and he wrote “75” on it to honor the Group of 75 prisoners of conscience; and two years in 2008-10 for “disrespecting” Fidel Castro.

More recently, he has been harassed, arrested, detained, etc. numerous times, as detailed in a recent report from Reporters Without Borders.

For more about Gutiérrez, read a recent post from Cuban blogger Luis Felipe Rojas in which Gutiérrez describes his experiences while in prison and his commitment to a free Cuba:

“Despite of all that has happened, I tell my oppressors to repent, to cease staining their hands with blood.  And to those who have kidnapped the happiness of Cuba, remember that we have all been created by the same God.  I tell them to repent before it’s too late for them.  Cuba needs to live in freedom, just like other nations of the world.  We Cubans have the right to be free and that is why many of us are fighting for it.”