Recently, I heard someone (t’was one of the “Marks”, either Levin or Steyn) point out something many do not … The only reason why, for the last several decades, Europe has been able to fully submerge itself financially/economically in post-WWII socialism is because the United States has provided them with a military defense (our bases in their countries) to guarantee their national security. Our European allies have been able to go merrily along with their government-run lifestyles because they slept (and protested our military bases and wars) peacefully at night knowing the United States Military stood ready outside their doors to do the hard and ugly things to preserve their slumber from interruption. And it has been funded by American tax dol— er, revenues. Yeah, that’s the ticket… 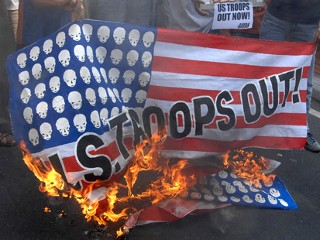 Yes, they have had their own individual versions of a national military, but as we have seen in ‘coalitions’ in Iraq and Afghanistan (and NATO) they are bare-bones and mostly lacking in combat mentality, determination, and leadership (with some exceptions). Even our lifelong ally Great Britain is a mere shadow of what it used to be militarily.

Britain’s army is now smaller than at any time since the Boer War, its air force at 1914 levels and the Royal Navy as small as Henry VIII’s. It’s presented as sound strategic policy but, Canadians and Americans take note, it really came from the welfare state’s intellectual, moral and fiscal bankruptcy.

Britain’s armed forces are clearly no longer adequate to the global role London still seeks. Last month the head of Royal Air Force combat operations warned the Libya turkey shoot was threatening the RAF’s capabilities and ruining morale, and the head of the navy said it was unsustainable for the fleet. […]

As a matter of fact, our military bases throughout Europe have contributed to Europe’s economy by just being there with its decades of troops, civilian staff and all their families in their daily economy. Imagine if shortly after WWII and during the Cold War the U.S. had pulled completely out of Europe. Western Europe on the other side of the Iron Curtain would have eventually been forcefully dragged into full Communism when the Soviets would have inevitably overrun them with their tanks. But for the last half of the 20th Century, and to this day, the USA has had bases in Europe (as well as Japan and South Korea), and has been essentially paying the bill for those nations’ security and defense … and yet their socialist nanny state economies are collapsing. Imagine how much more quickly they would have collapsed had we pulled our military bases, and U.S. dollars, out of their countries. Imagine what it would be like if we did so today in order to make cutbacks in our debt.

And here we are today … Our leaders in this nation are haggling over how to balance the budget, keep the debt ceiling from caving in under the pressure of our own entitlement beast while insisting we shouldn’t behead the monstrous leviathan, but increase its feeding with more ‘revenue’ to grow it even larger. As usual in these situations of hard cutbacks the democrats always start with this nation’s defense...

President Obama continues to push the notion that he wants a “balanced approach” to budget cuts, but it is becoming increasingly clear that the only spending cuts he is willing to contemplate are cuts in defense spending. The vast entitlement system that now eats the majority of tax dollars is, by contrast, not only on his list of programs to be sustained, but expanded. Mr. Obama seems determined to protect the welfare state. He lacks the courage and the candor to admit to the unsustainablity of an entitlement system which has pushed the nation to the brink of insolvency as our debts continue to mount. Instead of addressing the source of the spending problems, it is becoming clear that Mr. Obama intends to hollow out the military. What folly!

Only weeks ago, Obama signaled intentions to cut $400 billion from Defense, but key Democrats are already talking about even large cuts of $1 trillion to Defense. Such a move would signal a broad American retreat from the world and erode our national defense for many years to come. Obama’s military budget shenanigans are yet another reminder that the key characteristic of Obama’s involvement in any aspect of U.S. life–economics, policies or participation on the world scene—is that Obama’s policies have left Americans with a weaker world presence as a result of his involvement.

Military spending is an area which, traditionally, in past years, Dems have loved to cut. Democrat eagerness to cut military spending is the result of a fundamental, ideological difference: the GOP believes the U.S. is served best by a strong military, both at home and abroad, while Dems believe that a more kumbaya, we-are-the-world, approach is the way to best protect America. Obama, who first launched his apologize-to-the-world tour on this premise, has never been a keen supporter of endeavors military. Obama’s recent threats, that our veterans might not receive their retirement and disability checks if a debt ceiling-budget compromise is not reached by 2 August, just prove that point.

Meanwhile, we are selling combat weaponry to an Egypt that the Muslim Brotherhood is positioning itself to take complete power and control over (with Israel in its crosshairs), and funding nations and people who are not our loyal allies, but sworn enemies of our greatest ally in the region of the Middle East. In addition there is this:

Millions of dollars in American taxpayer funds intended for an Afghan transportation contract to promote local businesses were steered to the enemy Taliban, according to a military investigation cited in Monday’s Washington Post.

The aid, part of a $2.16 billion trucking contract for eight firms operating in war-torn Afghanistan, provides “seemingly definitive evidence” that U.S. funds are being directed to the nation’s enemies, according to the Post.

For four of the eight contractors there is “documented, credible evidence … of involvement in a criminal enterprise or support for the enemy,” according to the Pentagon report. Six of the eight had “fraudulent paperwork and behavior,” the report said.

And this doesn’t count the fact we are extremely negligent at drilling domestically for our own energy sources, and therefor at the mercy of OPEC who is headed by one of our biggest enemies Iran.

As it was, all we heard from these same democrats now pushing for deep defense cuts during the Iraq war was how ill-equipped our military was for war … a military that had been gutted by the previous democrat administration. So how would we then come to the rescue of our European allies, and Israel’s defense, if we, the United States, cut back our military to the likes of the “Once-mighty Britannia’s Boer War“-like levels? And even worse, with China holding massive amounts of our debt and salivating at the thought of cashing in the paper, and Russia pining to return to an imperialistic neo-Soviet stance in the world, exactly who would come to our defense? Our enemies have not disappeared … They have increased and see us now as weak. And the people in power in Washington DC seek to gut our defense in order to drag us into a neo-European form of a government-run existence within our own nation while Europe is about to proverbially disappear under the failure of the same socialism.

Perhaps it is the plan to take us back to that militarily primitive era of The Boer War … and the primal dawn of Marxism/communism/socialism. But where we will end up is the Dark Ages.