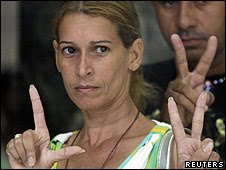 As far as the Castro dictatorship is concerned, it is Fidel’s birthday and they repress if they want to. Dania Virgen Garcia, a fearless woman and member of the opposition, placed protest banners outside her home on the birthday weekend of the vile and diabolical Fidel Castro. Within hours, the Cuban regime assembled mobs outside her home who spent hours throwing eggs at the house and shouting insults and threats. The repressive frenzy was further fueled by alcohol provided by the dictatorship to the thugs who participated in the “act of repudiation.” 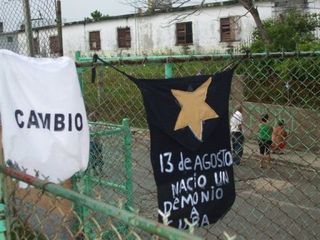 The banner Dania Virgen Garcia hanged in front of her home

To protest against the detention of anti-Castro activist Michel Iroy Rodríguez, Cuban independent journalist/blogger Dania Virgen Garcia on Saturday, Aug. 13 — the 85th birthday of Fidel Castro — hanged in front of her home in Havana a black banner declaring, “On the 13th of August, there was born a demon in Cuba.”

In response, Cuban State Security unleashed a vicious “act of repudiation,” with close to a thousand of elderly people, students, thugs and other Castro slaves besieging Garcia’s home for most of the weekend. Fueled by alcohol provided by police, the crowd shouted threats and insults and tossed dozens of eggs for several hours during the weekend, according to a report Garcia filed with Miscelaneas de Cuba.

Garcia, a former political prisoner, is a frequent target for the dictatorship’s goon squads, as she has repeatedly shown her courage and determination in resisting the regime and reporting on its bad behavior. Concern for her safety is warranted, and so is our admiration for her work.