Capitol Hill Cubans on who are the real “trusting fools” in the Alan Gross hostage crisis:

Yesterday, Alan Gross’s lawyer, Peter Kahn, a partner at the D.C. firm of Williams & Connolly, made public some selective excerpts of his client’s testimony during his farcical Cuban “trial” months back.

In the released testimony, Gross apologized for having been a “trusting fool.”

The widely-respected blog, Penultimos Dias, commented on this news item:

Those who aren’t “trusting fools” are the readers of these declarations, who have been following the events of Gross and who know the poor bet his lawyer made in keeping the whole case confidential, first, and then betting everything on the clemency of the Cuban government (later). After many months in Villa Marista [Castro’s secret police headquarters], Alan Gross said what he though would please the Cuban government. And it obviously didn’t work.

Although we’ve always believed this to be a tragic miscalculation of the nature and psyche of the Castro brothers, we’ve respected his prerogative.

However, it has become increasingly clear that Alan Gross needs a new legal strategy — or a new lawyer. 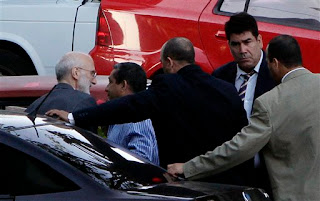