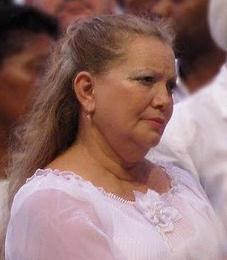 Via CUBA ENCUENTRO (my translation):

Laura Pollán and nine Ladies of Support detained in Matanzas

Sources in the dissidence told CUBAENCUENTRO that among those arrested was the delegate from the Rosa Parks Feminist Movement for Civil Rights, Sara Marta Fonseca

At least ten Ladies in White and Ladies of Support were detained Sunday morning at various locations throughout Matanzas, said sources in the dissidence.

Former political prisoner Hector Maseda told CUBAENCUENTRO that Laura Pollan, the leader of the Ladies in White, and Lady of Support Yaneris Perez Rey were detained in Colon when they attempted to attend a mass.

Other arrests in Colon included Sara Marta Fonseca, the delegate from Havana of the Rosa Parks Feminist Movement for Civil Rights organization, and other Ladies in Support. Last week, Fonseca, along with three other activists, participated in a protest against the government on the steps of the Capitol building in Havana.

Maseda also informed of the detention of five other Ladies in Support in Cardenas, and said that as of that moment, the whereabouts of the arrested women was unknown.

Radio Marti reported this Sunday that human rights activist Leticia Ramos Herreria, one of the Ladies in Support, remained under house arrest at her home.

According to Lady in White Berta Soler, the women in Cardenas were surrounded while they were walking down the street and taken away.

“It is very lamentable that we cannot walk down the streets of our own country and go to whatever church we choose to attend mass,” said Soler, who at that moment was on her way to mass at the Santa Rita de Casia church in Havana with several other women.

“Here, anything can happen because everything is a violation of rights and of the law,” said the Lady in White.