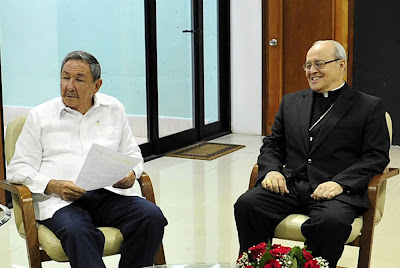 It is a story that keeps repeating itself; the Catholic Church in Cuba turns its back on the people while making excuses for the diabolical dictatorship that enslaves 11-million Cubans. In a press release yesterday from the Archdiocese in Havana, the Church tepidly condemned the brutalization of the opposition in Cuba, but refused to mention the Ladies in White by name, the principle victims of this brutalization. However, the Archdiocese did mention the Castro dictatorship when it the same press release, it affirmed the regime’s assertion that the violence against the defenseless women and peaceful dissidents was spontaneous and the dictatorship had nothing to do with it.

This latest betrayal of the Cuban people — and for that matter the tenets of Christianity and Christ’s teachings — is but another in a multitude of examples that clearly illustrate the corruption and the wretchedness of Archbishop Jaime Ortega y Alamino. The shepherd appointed by the Vatican to care for and protect the flock in Cuba has instead chosen to care for and protect the wolves that slaughter the sheep. In order to save himself and maintain his influential post, Cardinal Ortega feeds his sheep to the wolves in the hope it will satiate their hunger and keep them from attacking him.

The Catholic Church issued a statement that decries violence against defenseless people.

The Cuban government has denied it ordered violent repressions of the dissident Ladies in White, according to a Catholic Church statement Monday that added that any violence “against defenseless people has no justification.”

The carefully written statement issued by the Havana archdiocese avoided commenting on whether the violence reported by the women and other dissidents over several recent weeks was true or not.

It also made no mention of the Ladies in White by name, or their meeting with church officials in Havana last week to request that Cardinal Jaime Ortega intercede with the government to halt the violence.

Havana archdiocese spokesman Orlando Marquez issued the statement after a weekend in which members and supporters of the Ladies in White reported only some harassment but no violent crackdowns.

“In the past few days journalists have asked for the church’s opinion on incidents in which the wives of some former prisoners .?.. had been mistreated, according to their own declarations,” Marquez wrote in a note emailed to journalists.

“It is not necessary to ask for the church’s opinion,” he said. “It is well known, and we have reiterated it various times, that violence of any kind against defenseless people has no justification.”

The Cuban government “has communicated to the church that no national decision center has given the order to attack these people,” Marquez added.

Ladies in White spokeswoman Berta Soler praised Ortega and the church but said that was a government “big lie” because the violence against the women has come from government-organized mobs and state security agents. The mobs are made up of members of pro-government groups such as the Cuban Federation of Women, and are organized and transported by known state security agents for the Ministry of Interior.

“Those who are hitting us are the mobs, as well as the state security agents,” Soler said by telephone from her home in Havana.

Marquez’s statement also said the church supports only those who share its search for “the well-being of the Cuban people, the reconciliation and peace for all, through attitudes and gestures that favor the serene development that Cuba needs.”

“Any other way of looking at Cuba’s reality that could affect peaceful coexistence and break down the nation’s well-being cannot find any support among those of us who have a Christian vision of the world,” the statement added.

Most of the recent crackdowns on the Ladies in White have been reported in eastern Cuba, where they have been trying to establish their right to attend Sunday Masses at the Santiago cathedral and stage protest marches afterward — just as their counterparts in Havana do every Sunday.