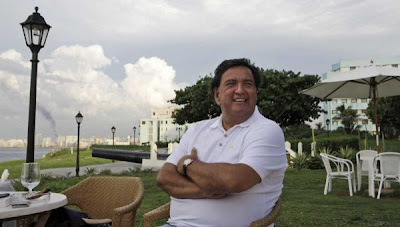 Acting on an invitation from the Castro dictatorship to perform, former New Mexico governor Bill Richardson is in Cuba once again; his fourth trip to the island. According to his spokesperson, the official reason for his visit to the island prison, which holds 11-million+ inmates, is to seek the release of American hostage Alan Gross. But do not think that the former Energy Secretary and ambassador to the UN is roughing it during his stay in Cuba. While the vast majority of Cubans live in abject poverty and suffocating oppression, Richardson is enjoying the luxury of the “posh” Hotel Nacional in Havana with a Cuban cigar in one hand and a frosty drink from the hotel bar in the other.

Surrounded and escorted by Castro security agents every second of the day during his visit to Cuba, Richardson will once again play the role of dupe for the Castro regime. Do not feel bad for him, however. He is not the first American “dignitary” to gladly and willingly do so, and unfortunately, he will not be the last.

It is a dog and pony show written, directed, and produced by the Castro dictatorship. Richardson will proudly play the role of pony opposite Alan Gross, who has been enlisted against his will to play the dog for almost three years now. Approaching 53 years, it is perhaps the longest running show in human history. The script, however, has not changed much over the decades. The plot and the story remain intact, a tale of  good (the Castros) vs. evil (the U.S.). And every performance concludes in the same manner with a tearful and sentimental plea for the evil U.S. to stop punishing the benevolent and kind Castro dictatorship.

Bill Richardson’s run in the Castro Dog & Pony show will conclude as all of the other shows have concluded. Perhaps a twist or two may be thrown in for fun, but the ending will be the same: The evil U.S. should stop punishing the benevolent and kind Castro dictatorship.

One would think that after more than half a century, the world, and in particular Americans, would grow weary of the same plot line and the same ending over and over again. But the truth is that the Castro regime has never had difficulties recruiting American actors to perform in their Dog & Pony show.