A kerfuffle has broken out in Union City, NJ as news broke out that Ecuador’s dictator Rafael Correa was scheduled to visit the city and give a speech at a local high school. Once the invitations went out in this community that happens to be heavily populated with Cuban American victims of communism, all hell broke lose:

The president of Ecuador is scheduled to visit Union City to attend a cultural event, and possibly speak, The Jersey Journal has learned, enraging the North Hudson Cuban community because of his ties to Communist leaders Hugo Chavez and Fidel Castro.

The controversy created by the event, scheduled for 8 p.m. Friday at Union City High School, has 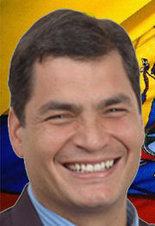 An invitation for the event includes a photo of Rafael Correa, the president of Ecuador, a socialist country, with the words “Welcome President!” The invitation also includes a list of performers, many of them Ecuadorian.

Union City officials met last night with members of the Cuban community at the Templo Masonico Zona Norte and after the meeting, a spokesman for Mayor Brian Stack said city officials will be meeting this morning to make a “final determination” on whether to allow Correa to appear.

A news conference has been scheduled for 2 p.m. at City Hall in Union City to announce their decision, the spokesman said.

Jessica Escala Maccareri, the consul general for Ecuador in New Jersey and Pennsylvania, did not return calls for comment.

The event was originally planned as a cultural show proposed by the Ecuadorian officials in New Jersey, since North Jersey is home to a large Ecuadorian community. It appeared innocent enough, the source said. And until last week the city was told Correa, who will be in the area to attend a session at the United Nations and speak at Columbia University Friday, would attend.

“As a Cuban-American I think it is not appropriate for (Correa) to come here,” said Union City Commissioner Lucio Fernandez, who said that his mother and stepfather had suffered at the hands of the communist regime in Cuba.

Correa, who was voted into office in 2006, entered Ecuador in the Chavez-backed Bolivarian Alliance for the Americas, which includes Venezuela, Bolivia and Cuba.