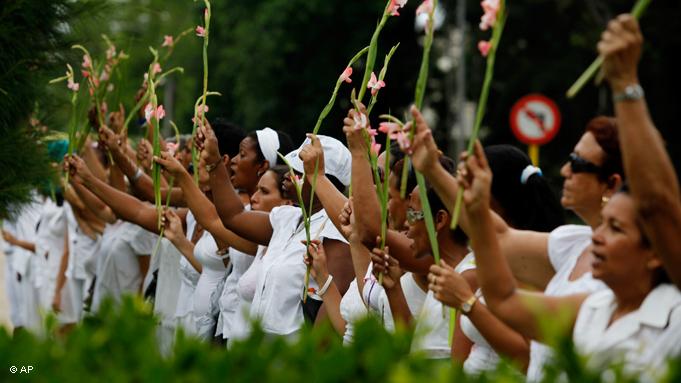 The Castro regime’s State Security kicked into high gear yesterday carrying out a wave of arrests and detentions of Ladies in White and other opposition members who were trying to travel to Havana to attend the wake of Laura Pollan. The tragedy of death and loss means nothing to the Castro regime other than it being another tool they use to intimidate and repress. The Cuban dictatorship has no mercy or charity when it comes to the suffering of others. On the contrary, their lack of mercy and charity have been some of the despicable traits that define the regime of the Castro brothers.

This morning, several Ladies in White, opposition members, and independent journalists find themselves either in the custody of the Castro dictatorship’s political police, or on house arrest with the threat of being beaten up and arrested if they dare set foot outside their home. The regime is doing this to stop dissidents throughout the island from congregating in one place to mourn the death (actually, murder) of one of their leaders, Laura Pollan.

This shows not only the pettiness and lack of humanity that characterizes the Castro dictatorship, but also its mortal fear of allowing a few women dressed in white to congregate together in one place. The regime is so weak, they cannot withstand peaceful opposition, and they will do whatever they can to quash that opposition, even if it means murdering a retired school teacher.

Uncommon Sense has more on the detentions HERE.

Halablo Sin Miedo has the latest reports from Cuba on the detentions HERE, HERE, and HERE.