CUBAN WOMEN IN EXILE TO HOLD CANDLELIGHT VIGIL IN MEMORY OF LAURA POLLAN.

Due to climatic conditions reports that indicate high probability of heavy rains for this Wednesday, we have postponed again The Vigil in memory of Laura Pollan to Friday, October 21, at 7:30 P.M in the George B. Merrick Park, across from the Coral Gables City Hall, a significant day that marks one week since her death.

United in sorrow and indignation, we call upon exile organizations and the community in general to honor an extraordinary woman, whose courage, tenacity and devotion for a free Cuba were the essence of her life as part of the Cuban civic resistance movement.

At the same time, let this serve to remind public opinion, that the strange circumstances surrounding her death is but another example of how the Castro dictatorship has eliminated its opposition during the last 53 years.

Laura Pollan was never intimidated by the regime’s repression and this vigil is a tribute to her struggle as a beacon of freedom, so that her example continues to grow in Cuba and exile until her dream of a free and democratic Cuba is achieved. 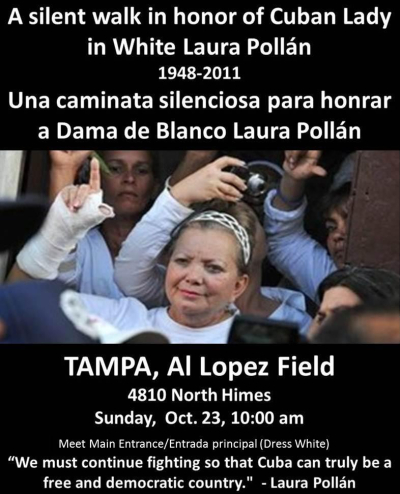