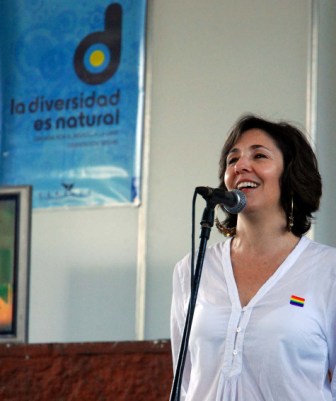 Cuban dictator Raul Castro’s daughter is a worldwide celebrity of sorts. For the past year or so, Mariela Castro has been been the recipient of positive press coverage throughout the world. As the director of the Castro regime’s National Center for Sexual Education (CENESEX), Ms. Castro is portrayed as a compassionate social progressive for her modern views of human sexuality and her supposed embrace of gay rights on the island and in the world. In reality, Mariela Castro only cares about Mariela Castro. She is a child of privilege, an elitist, who uses the public office bestowed upon her by her dictator father and tyrannical uncle to endear herself to a world all too willing to ignore the repression and despotism she represents and defends.

Few things illustrate the elitist Ms. Castro’s utter disdain and lack of compassion for the Cuban people and the misery they suffer than a remark she makes in this interview with Radio Netherlands. At the 1:35 mark of the video, Mariela Castro enjoys a hearty laugh at the expense of Cuban women who are forced to prostitute themselves by exchanging sex with construction workers in order to fix a bathroom because they have no money. The vile repulsiveness of the Castro dictatorship’s elite cannot be made any clearer.

To the women in Cuba who are forced to sell their bodies in order to feed and clothe their families, have running water in a bathroom or a stove that works to somehow ease the suffering from the misery of living under a brutal and merciless tyranny, this is shameful and demeaning tragedy. To Mariela Castro, however, it is a source of laughter.

7 thoughts on “For Mariela Castro, Cubans forced into prostitution is a laughing matter”