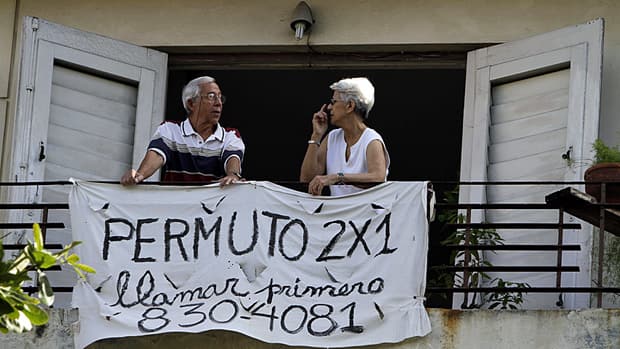 With an official announcement appearing yesterday in the Cuban communist party’s mouthpiece Granma, the wheels of the Castro propaganda bus began spinning. One by one, the international media began reporting on how Cubans will now be allowed to buy and purchase “private” property, echoing the news disseminated by the Cuban dictatorship. Once again, international journalists, including those in the U.S., are allowing themselves to be used as propaganda mouthpieces, happily parroting disinformation without even a cursory attempt to analyze the details or test the veracity of the claims.

This short AP headline on an article reporting this news pretty much sums up the media’s willingness to play along and be manipulated by a ruthless dictatorship:

You do not have to go further than the headline to know the rest of the article will be a waste of time. In Cuba, there is no such thing “private” property. Everything is owned by the State, or better said, the monarchical Castro dictatorship. Before you can legalize the sale of private property, you must first legalize the ownership of private property. That is something the Castro regime has not done, and like any typical feudal lord, will never do.

But that did not stop the AP from reporting this new “law” as some type of meaningful reform. In this case, as is the case with most news stories coming out of Cuba, the truth is inconvenient for the Havana bureaus of the news media. None of them want to get kicked off the island, so they play ball with the dictatorship and push along the propaganda points distributed to them.

Then, the details of the new regulations revealed that privileges were reserved for Castro’s officials and those that work in the regime’s “strategic sectors” (e.g. tourism and the police).

This news will be distributed internationally with great hype and fanfare as more evidence of Castro’s “reforms.”

Then, the details and implementation will be revealed — fraught with disappointing caveats and special privileges.

Meanwhile, the month of October 2011 continued the Castro regime’s record-setting trend of political arrests and repression.

Yet, Castro’s “announcement” will provide weeks (if not months) of distractions from the repressive realities on the ground.

1 thought on “The Castro regime’s farcical ‘reforms,’ and how the media plays along”