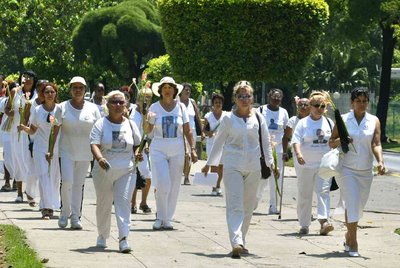 Yesterday was Sunday, which means the Castro dictatorship’s State Security mounted its weekly operation to stop the Ladies in White from attending Sunday mass. In a report directly from Cuba, independent journalist and former prisoner of conscience Jose Daniel Ferrer Garcia reports that several Ladies in White were placed under house arrest at 2:00 am Sunday morning, while others were harassed and prevented by agents of the Castro regime from attending mass later that morning. According to Ferrer, the Cuban political police had already mobilized rapid response brigades Sunday morning to attack any Ladies in White that attempted to peacefully march through the streets of Cuba to attend Sunday church services.

Listen to the report without fear at Hablalo Sin Miedo.