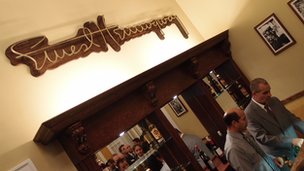 The recent opening of the Ernest Hemingway Bar at the Castro dictatorship’s Interest Section in Washington D.C. has prompted a new and ongoing series here at Babalú that we call “Are you an invitee of the Castro dictatorship?” Since the bar is only open to Americans friendly to the Cuban regime, in this series we will comb the news wires to find out just who in the U.S. does the Cuban dictatorship consider to be a friend.

We already found out last week that former DNC head Terry McAuliffe and the director for the Center for Cuban Studies Sandra Levinson were VIP guests of the Castro regime at their new bar. And today we learn from the print version of Politico that the Cuban dictatorship had a few more notable guests at their shindig:

Several boldface names showed up Thursday night for the Cuban Interests Section’s fete, which included Cuban cigars, mojitos, and a Cuban band for the opening of its Ernest Hemingway bar, according to a PI tipster. Former Democratic National Committee Chairman Terry McAuliffe, Mavis Anderson, of the Latin American Working Group, Wayne Smith, former head of the U.S. Interests Section in Cuba, Democratic operatives Hani Masri and David Jones of Capitol Counsel were spotted in the crowd of about 300 people.

Despite the festive atmosphere, Anderson said it’s tough to expect progress in an election year. “During an election year, it’s hard to see great strides being made, but the case can continue to be made that we’re going in the right direction and we should continue.”

1 thought on “Are you an invitee of the Castro dictatorship?”