Notes from the Cuban Exile Quarter takes a look at the 22nd anniversary yesterday of the fall of the Berlin Wall:

Tearing Down Walls: 22 years ago today in Berlin and now in Havana

22 years ago today the Berlin Wall fell. And the wall of control and censorship that surrounds us when will it fall? – Yoani Sanchez via twitter on November 9, 2011

22 years since the Fall of the Berlin Wall, while in Cuba there are still walls standing against citizen freedom. – Luis Felipe Rojas via twitter on November 9, 2011 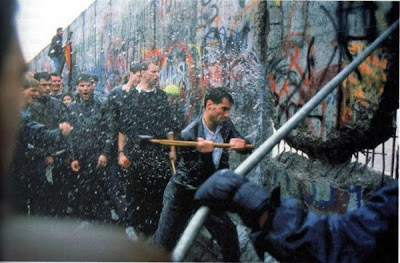 Tearing down the Berlin Wall

22 years ago today the Berlin Wall began to be physically torn down. It was a great day for freedom and the triumph of long years of nonviolent resistance throughout Eastern Europe. The Berlin Wall had been constructed beginning on August 13, 1961 with barbed wire fence followed by a 100 mile wall and more than 300 watch towers to spot and shoot escapees and the East German communists called it the “Anti-Fascist Protection Rampart.” Minefields were laid in some sectors.