The Washington-based Center for Democracy in the Americas, which apparently supports democracy everywhere in the hemisphere except Cuba, has issued a new report on the Castro regime’s “reforms.”

That despite 52-years of lying, stealing, beating, arresting, torturing and executing Cubans (the report conveniently ignores these facts), the Castro regime is finally trying to “reform.”

Thus, the U.S. should support the Castro regime (the 0.01% that controls 100% of Cuba’s wealth and political power) in its “reform” efforts.

(Ironically, the CDA’s report was funded by the Ford Foundation and the Christopher Reynolds Foundation — part of what they would otherwise label as the 1% that controls 100% of the U.S.’s wealth).

– To send even more money to Cuba from abroad (so Castro can continue building his hard currency reserves in foreign banks, which have doubled since 2009).

– To allow the export of dual-use technology to Cuba (for Castro’s repressive military and intelligence apparatus can’t be all that bad).

– To allow the Castro regime access to the World Bank and International Monetary Fund (surely an appropriate use of U.S. taxpayer money).

– And of course, to stop funding USAID’s Cuba democracy programs (for the promotion of democracy has no place in Cuba). 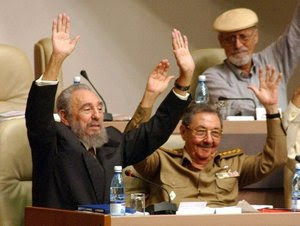 2 thoughts on “Report from The Center for Democracy in the Americas calls for U.S. to support Cuban dictatorship”