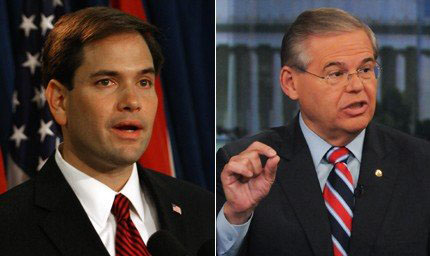 Democrat Senator Bob Menendez and Republican Senator Marco Rubio led a bipartisan effort late yesterday to stop a “minibus” Senate spending bill, which contained another unilateral concession to the Castro dictatorship. In a three-bill spending package that funds the State Department and foreign operations, a provision was inserted that would allow U.S. banks to do direct business with the Castro regime. This provision would have given the illegal and criminal Cuban dictatorship permission to open bank accounts in U.S. financial institutions.

The Senate was stalled on Monday evening as senators started debate on the energy and water appropriations bill, which Senate Democratic leaders want to combine with the State and foreign ops and financial services appropriations bills into a miniature omnibus measure that’s affectionately known on the Hill as a “minibus.” By packaging three bills together, the Senate hopes to be able to get more work done faster. However, two senators won’t let that happen until their concerns about language allowing U.S. banks to do business in Cuba are addressed.

“There is concern among a group of senators on both sides of the aisle with longstanding concerns for human rights and democracy in Cuba with regard to the loosening of restrictions on Cuba in the financial services bill,” a senior GOP Senate aide told The Cable Monday afternoon. “If that language was taken out, those senators would drop their objection to bringing up foreign ops for consideration.”

Procedurally, Senate Majority Leader Harry Reid (D-NV) has already brought up the energy and water appropriations bill and wants to add the other two bills (state/foreign ops and financial services) as an amendment. But Reid needs unanimous consent in order to do that without a lengthy cloture process, and we’re told by Senate sources that Sens. Robert Menendez (D-NJ) and Marco Rubio (R-FL) are objecting.

“Senator Rubio is objecting to a provision in the bill that would allow Cuba to become the only country on the State Department’s State Sponsors of Terrorism list with a general exception for access to U.S.-based financial institutions,” Rubio’s spokesman Alex Conant told The Cable. “Under Cuban law, the Castro regime has a monopoly on all banking, commerce and trade, so this amendment would allow Cuba’s totalitarian regime to directly open corresponding accounts in U.S.-based financial institutions, and vice versa.”

The senators don’t have any problem with the State and foreign ops section of the minibus, but Reid’s attempt at adding both bills as one amendment has embroiled them in the dispute.

We’re told by Senate sources that Reid plans to bring up the amendment containing both the State and foreign ops and financial services bills anyway and call for a unanimous consent vote, forcing any senators who object to show their cards. When the objections are made, Reid will be ready with a new amendment that doesn’t contain the disputed Cuba provisions, which is likely to achieve unanimous consent.