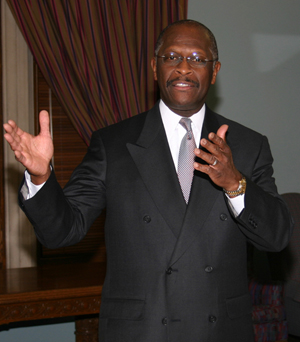 It says a lot about the supposed decrease in political influence of Miami’s “hardline” and “intransigent” exile community when almost every U.S. presidential candidate still sees a stop for a Cuban coffee at the iconic Versailles Restaurant on Calle Ocho an obligatory event.

WEST PALM BEACH, Fla. – Amidst continued talk of a sexual harassment scandal, GOP presidential candidate Herman Cain is set to bring his campaign to South Florida this week. The Republican will campaign in Miami-Dade, Broward, and Palm Beach counties on Wednesday.

In Miami, Cain will visit noted Little Havana restaurant Versailles. The restaurant is one of the most prominent amoung Miami’s Cuban community and a regular stop on national and statewide campaigns.