“As long as this government is around there will be prisoners because while they’ve let some go, they’ve put others in jail. It is a never-ending story.” – Laura Pollán (2011) 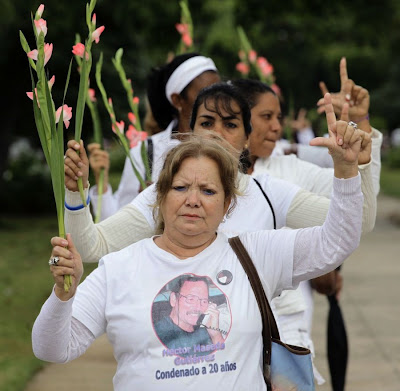 One month ago on Friday, October 14 at 7:50pm Laura Pollán died of heart failure following being hospitalized for one week. Later that same night a special Mass was held for Laura at Our Lady of Charity in Coconut Grove, Florida. In the space of a month there has been an outpouring of sorrow both inside and outside of Cuba and the Ladies in White renamed themselves The Ladies in White “Laura Pollán” to honor her memory. Polish solidarity leader Lech Walesa sent a letter of condolence to her family. The Economist published a remembrance of the Lady in White leader.

Dr. Oscar Elías Biscet conducted a medical analysis of the painful, tragic and unnecessary death of Laura Pollán that he published on October 30, 2011. Others also raised questions around the circumstances of the Lady in White leader’s death.