The Wall Street Journal is reporting that intelligence reports from two different countries indicate that the cancer afflicting Venezuelan dictator Hugo Chavez has spread to other parts of his body. It is very possible the aggressive cancer may render Chavez unable to campaign for the October 2012 elections where he is running for “re-election.” 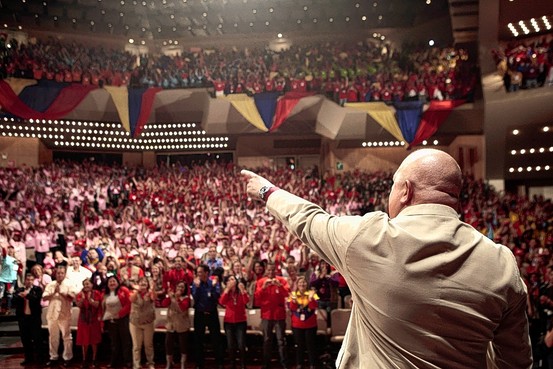 Documents from intelligence services of two countries suggest Venezuelan President Hugo Chávez’s cancer has spread to his bones and is more aggressive than his government has reported.

The reports, based on interviews with people who have had access to Mr. Chávez’s medical team, are likely to feed recent rumors that the man who has led Venezuela since 1999 won’t be healthy enough to stand for re-election in October, potentially throwing the country’s political future in doubt.

Mr. Chávez says he is now cancer-free after having a baseball-sized tumor removed from his pelvic area in June and four rounds of chemotherapy—though he has refused to discuss what kind of cancer he had.

On Sunday he again proclaimed his good health—and delivered an hour-long speech that he said marked the beginning of the 2012 presidential campaign.

“Some people keep saying I’m dying, that’s what they would like. But check out how I practice my hook,” said Mr. Chávez, weaving and bobbing like a boxer, to the delight of a crowd of thousands of red-shirted followers.

A Nov. 1 report from a European intelligence agency says medical tests show a “clear and significant growth of cancerous cells in the patient’s marrow,” according to a copy of the report viewed by The Wall Street Journal.

Doctors treating Mr. Chávez privately concluded that “the spread of the disease is now accelerating,” the report said. Reports by another intelligence agency drew the same conclusion.

The Venezuelan government denied the reports, and said only Mr. Chávez is authorized to speak about his health.

It can be a fool’s bet to predict the demise of leaders in such secretive nations. U.S. intelligence chief John Negroponte publicly predicted in 2006 that Cuban dictator Fidel Castro had just months to live. Mr. Castro is now retired, 85 years old, and writing an occasional column for the Cuban Communist Party’s newspaper.

If the cancer has spread to Mr. Chávez’s bones, that would indicate his cancer is incurable, said Dr. Alan Venook, head of the gastrointestinal cancer program at the University of California at San Francisco.

But Mr. Chávez could live “a number of years” depending on what treatment he receives, Dr. Venook said. “There are just too many missing pieces to give a prognosis,” he said.

Mr. Chávez’s health is a worry from Caracas to China. His speech on Sunday came days after former U.S. Assistant Secretary of State Roger Noriega wrote in a column that the Venezuelan is unlikely to survive more than six months unless he changes his anti-cancer treatment.

Mr. Noriega said the treatment was calculated to keep him politically active in the crucial pre-election season, in place of a more aggressive treatment that might prolong the president’s life expectancy. Mr. Noriega urged policy makers in the U.S., which gets 900,000 barrels of oil a day from Venezuela, to plan for the chaos that could ensue if Mr. Chávez were to die and a power struggle break out.

Supporters of the charismatic leader worry his absence would lead to infighting among his would-be successors, none of whom enjoy his mesmerizing hold on the loyalty of Venezuela’s millions of slum dwellers.

Colombia also worries about political upheaval next-door. In Cuba, the survival of Mr. Chávez is crucial to the continuation of virtually free Venezuelan oil shipments—an economic lifeline for the regime of President Raúl Castro.

Moscow, which has sold Venezuela billions of dollars in jets, ships and helicopter, and Beijing, which has lent the Chávez government $32 billion as a down payment on more than 400,000 barrels of oil a day from Venezuela, are also watching.

Dr. Venook said that between the two, a spreading of cancer to the bones would usually be associated with prostate cancer rather than colon cancer.

Other doctors have speculated that he has sarcoma, a soft-tissue cancer.

A U.S. official says that he has seen intelligence reports suggesting the Venezuelan

leader may have as little as six months to live. But another U.S. official said: “We just don’t know.”

One factor fueling rumors is the secrecy surrounding the patient. In June, after Mr. Chávez disappeared from public view during a trip to Cuba, the government tried to quell rumors about his health by saying he had a pelvic abscess. But on June 30, Mr. Chávez admitted what most people suspected: He had cancer.

In October, a leading Venezuelan surgeon told a Mexican newsmagazine that the cancer was much more aggressive than had been openly admitted. The doctor, Salvador Navarrete, said members of Mr. Chávez’s family had given him the information.

Dr. Navarrete backtracked from his statements, and fled the country after he said his clinic had received a visit from the state intelligence agency.