The results of yesterday’s national elections in Spain sent shock waves throughout Europe and the world. The conservative PP party trounced the ruling socialist party, the PSOE. On one faraway island in the Caribbean, however, the outcome was especially disconcerting. The dictatorship of the Castro brothers in Cuba lost an important ally and supporter when the socialist PSOE party was resoundingly rejected at the voting booth by Spanish voters. After enjoying years of support and consistent lobbying in the European Union from the PSOE, it seems the Castro regime has now lost not only an ally, but a Spanish government that was more than willing to be complicit with them in the systematic repression and enslavement of the Cuban people.

Only time will tell if Spain’s new leadership will have the courage and the character to rectify the harm done to the Cuban people by Spain’s immoral socialist government. One thing is for certain, though; the Castro dictatorship has lost an irreplaceable ally in Europe.

Via the UK’s Daily Mail:

With 97 per cent of the votes from the election counted, the Popular Party, led by Mariano Rajoy, won 186 seats compared to 154 in the last legislature, while the Socialists plummeted from 169 to 110, their worst performance ever.

The PP won an absolute majority and resounding mandate from a deeply troubled electorate. It needed 176 votes for such a cushion in the lower chamber of Parliament, the main one. 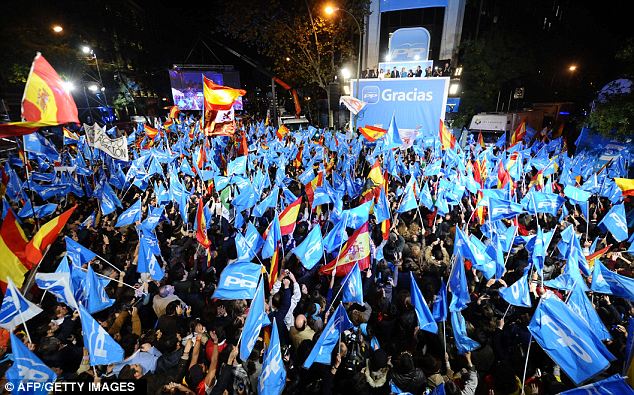 More coverage of the Spanish socialists’ demise at Spain’s ELPAIS (in Spanish).