A public protest initiated yesterday by Cuban human rights activists at the Fraternity Park in Havana was quickly quashed by Castro State Security with several activists and bystanders being violently arrested. The protest was led by two women in Cuba’s peaceful opposition movement, Ivonne Malleza and Blanca Hernández Moya. Their act of resistance against the repressive Castro dictatorship was highlighted by the support they received from the throngs of bystanders when the Cuban State Security agents attempted to arrest them. A crowd of people surrounded the women in an attempt to protect them from the agents, forcing the security officials to pepper spray the crowd in order to reach the two women.

The report from CUBAENCUENTRO (my translation):

Activists displayed a sheet with the words “Stop the lies and deception of the Cuban people” and “End the hunger, the misery, and the poverty in Cuba”

Activists Ivonne Malleza and Blanca Hernández Moya led a protest this Wednesday against the island’s government at the Fraternity Park in Havana, say sources from the dissidence.

Malleza Galano, who is 33, and Hernandez Moya, 77, displayed a sheet with the phrases “Stop the lies and deception of the Cuban people” and “End the hunger, the misery, and the poverty in Cuba,” said Mayra Morejon to CUBAENCUENTRO, who was also present at the protest.

Morejon explained that for almost 20 minutes, the activists demanded from the government “food for the children, liberty for the Cuban people, and a raise in pensions” for the elderly, among other demands.

The activists said that while the women were protesting, “two police officers came running” and attempted to “take away Ivonne’s sheet.” But the crowd gathered around her came out in her defense and demanded that the police let her go, and then the police officers “backed away from her.”

According to Morejon, more police and patrol cars arrived and began “pepper spraying the people.” They arrested Malleza Galano, her husband, Ignacio Martinez Moreno, who was beaten, and Hernandez Moya. All of them are currently at the Zanja y Dragones police station in central Havana, said the activist.

More photographs of the protest from Punt de Vista: 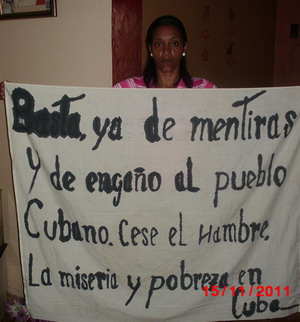 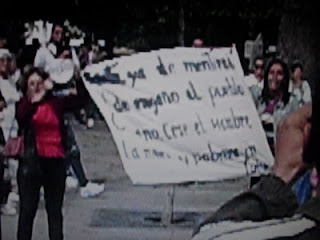 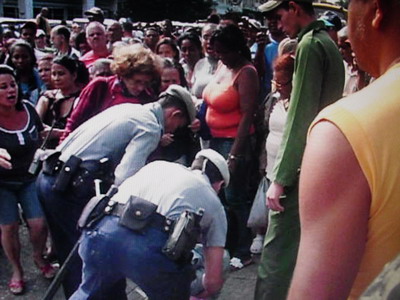 A news report on the protest from last night’s A Mano Limpia:

More coverage of the protest is available at the Directorio Democratico.