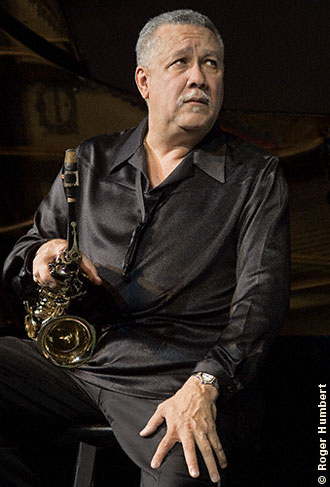 An excellent editorial from Cuban jazz-great, Paquito D’Rivera in JazzTimes:

In the mid-’80s, Miami’s Willy Chirino had a hit song, a cute Cuban guaracha with a chorus that went, “If she wears a bikini, punish her! If she wears a mini-skirt, punish her!” The song was about a tycoon whose wife was kind of loose. So each time she slipped, her husband would “punish” the woman by buying her a mansion, the latest-model sports car, or a vacation with her girlfriends in the Bahamas.

In recent years, the U.S. government has taken Chirino’s parody too seriously, or perhaps someone convinced them to apply such a peculiar disciplinary concept to the most cruel and dangerous of dictatorships in this convoluted world of ours.

The situation reminds me of something that occurred between the U.S. and a different oppressed state in February 2008. In a friendly and conciliatory gesture, the Bush administration sent the New York Philharmonic Orchestra to a gala concert in North Korea. Naturally, Kim Jong Il didn’t even bother to attend. His answer was to expand his threatening atomic arsenal.

Cuba has seen many injustices in the past decade: the sentencing of Dr. Óscar Elías Biscet, a devoted follower of Dr. Martin Luther King’s ideas, to 25 years in prison in 2003 (he was released in March, thanks to Cuba’s Catholic hierarchy); Orlando Zapata Tamayo’s death in a hunger strike in 2010, and the physical and mental abuse of his mother, Reina Luisa Tamayo; the jailing of 75 dissidents that resulted in the formation of the self-sacrificing Ladies in White; the incarceration of hundreds more dissidents; and even the arbitrary detention of American citizen Alan P. Gross in 2009, just for providing computers and cell phones to “non-authorized” citizens.

In 2010 and 2011, seemingly in celebration of such horrors, the New York City Ballet, the Jazz at Lincoln Center Orchestra and the Chico O’Farrill Afro Cuban Jazz Orchestra, under Chico’s son Arturo’s direction, traveled to Cuba, accepting an invitation from the Ministry of Culture of the oldest dictatorship in the hemisphere. “Ours is not a political visit. It is strictly musical,” the travelers simply affirmed, as if, in a totalitarian country like Cuba or North Korea, absolutely everything doesn’t have markedly political intentions.

“The beauty and purity of Cuba is they don’t have any Starbucks or McDonald’s there,” stated a member of the JALC band to Jeff Tamarkin of JazzTimes. Bizarre remarks, especially when talking about a country where people receive four ounces of coffee powder, mixed with ground split peas, per month, and it is easier to find a UFO in your kitchen than a tiny piece of meat in the freezer—that is, if you have a freezer and electricity to run it!

Examples of American “friendly aggressions” toward ill-governed nations have been many, and we’d better not even talk about the shameful U.S.-China business relations. On the other hand, the increasingly repressive nature of the Castro brothers’ dictatorship finally persuaded many other nations to condemn their half-century-plus of abuse and arbitrariness.

Meanwhile, President Obama’s administration, following the Chirino song’s chorus, “punishes” the repressor by encouraging travel and cultural exchange between American artists and their counterparts in what is left of our island. This basically translates into considerable new revenue for the Castro government.

And then there are the huge Cuban festivals in different American cities, events that showcase only what the Castro regime decides the American people should see. In one such festival, “¡Sí Cuba!,” held earlier this year in New York, the valuable contributions of legendary Cuban exiles like Celia Cruz, Cachao, Arturo Sandoval, Andy García, Gloria Estefan, Bebo Valdés and so many other giants of our national culture were absent. They have been systematically deleted from our suffering country’s history books.

Among the supposed advantages of these cultural “exchanges,” the Castroids authorized a few American companies to provide instruments and accessories to Cuba’s music schools, something that my family and I have been doing since 1968, when my parents came as refugees to the U.S. I imagine the happiness those kids feel when they get their hands on those beautiful Yankee horns—instruments that, during the dark years of Soviet “protection,” the Communist government was never capable of providing. Who would deny the noble generosity of this gesture?

But after more than five decades of economic failure, artistic censorship, hunger and people drowning in the Florida straits, I wonder if charity is what Cubans really need. What the Cuban people require is freedom of speech and movement, democracy and opportunities to independently create wealth, without the odd mediation of third parties in coordination with an ancient, oppressive system that controls every single aspect of our lives.

2 thoughts on “The ‘Strange’ exchanges between the U.S. and the Castro dictatorship”