To the Castro dictatorship, it makes no difference whether a human rights activist is a man or a woman: They will brutally and mercilessly beat either and murder them if necessary. Ivonne Malleza is a peaceful human rights activist who confronted the tyranny of the Cuban government and has been imprisoned since a November 30th protest. As she did on the streets of Cuba, Ivonne continues to confront the Castro dictatorship in prison — something the regime does not and will not tolerate.

Ivonne has medical issues, however, and while her spirit remains strong, her body cannot tolerate much more of her jailers’ physical and mental abuse. The regime is quite aware of this and sees the situation as an opportunity to accelerate her deteriorating health until she is finally dead. 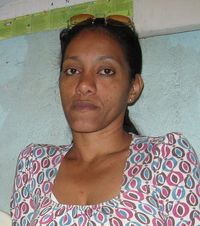 The blog La revolucion de los gladiolos reported Wednesday that after more than a week on hunger strike, Malleza is in “grave danger.” She was recently transferred to the maximum security Manto Negro prison, where she was being held in an isolation punishment cell. (There was one report that Malleza was being forced to remain in the nude.)

The blog reported that Malleza is suffering heavy bleeding caused by uterine fibroids. She has requested medical attention — a plea that has fallen on the deaf and/or indifferent ears of her jailers.

Malleza also has gone two days without drinking water because the only available water is warm and in a dirty container. Her supporters worry that if she doesn’t drink water soon and receives needed medical care, she is at risk of organ failure and eventually, death.

Malleza, her husband Ignacio Martinez and another activist, Isabel Alvarez, have been in jail since Nov. 30, when they were arrested after they went to a Havana park and unfurled a banner carrying anti-Castro slogans.

For more about Malleza, read this.