The cruelty of the Castro dictatorship is well documented throughout its more than half-century long history. For that reason, it is no surprise they are denying family members Ivonne Malleza, a human rights activist and political prisoner, the right to visit with her while she is being held in prison.

Via Hablalo Sin Miedo (my translation):

Today it was discovered that the sister-in-law of Ivonne Malleza Galano’s husband was not allowed to enter the Manto Negro prison and visit Ivonne because when she arrived, she said hello to a group of five Ladies in White who were at the entrance of the prison. Only Ivonne’s mother was allowed to enter. Later, Ivonne called via telephone and said they had brought in a surgeon to submit her to an operation to remove a fibroid she has that bleeds constantly and does not allow her hemoglobin count to return to normal. She said she would not allow them to do the surgery inside the prison and also that she had been transferred out of the punishment cell, authorities telling her that it needed repairs. Ivonne remains firm and strong although her health continues to deteriorate. 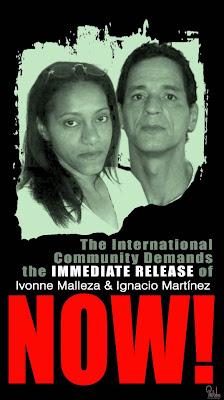