On Friday, The White House released a non-political statement of condolence for the death of Cuban prisoner of conscience Wilmar Villar Mendoza.

But it was insulting for the State Department to follow-up with this political statement:

“We will continue to support, in the words of the president, ‘pockets of freedom’ in Cuba through Cuban American family visits and remittances, purposeful travel, and humanitarian assistance to dissidents and their families.”

How has the Obama Administration’s travel and remittance policy created “pockets of freedom”?

To the contrary, it has more than doubled the Castro regime’s hard currency reserves (as confirmed by the Bank for International Settlements), which is currently bankrolling the worst wave of repression in 30 years (since President Jimmy Carter had a similar policy).

To the contrary, it never mentioned them once by name until after their tragic deaths.

To the contrary, the trips being approved by State (and pre-approved by the Cuban dictatorship) are focused on salsa dancing, baseball games, cigar factories and visits with the Castro family, the Ministry of Tourism, the repressive Committees for the Defense of the Revolution (CDR) and other regime entities.

We challenge State and Treasury to show us just one approved “people-to-people” itinerary that includes visits with the Ladies in White, the Cuban Patriotic Union or any of the numerous pro-democracy groups across the island.

They don’t exist. Why?

Because the Obama Administration’s “people-to-people” travel category is not aimed at supporting these courageous pro-democracy activists. It is aimed at creating greater understanding with their oppressors, the Castro regime.

To add even further insult, State and Treasury’s requirements for travel under the “Support of the Cuban People” are more stringent than those under Obama’s “people-to-people” tours led by the Castro regime.

That’s right, the Obama Administration’s policy makes it more burdensome to travel to Cuba to help pro-democracy activists than to travel on a “people-to-people” tour hosted by the Castro regime.

That is a fact.

It is the same absurd rationale that has led the Administration to exchange letters with Iran’s Ayatollah Khamenei, while democracy activist filled the streets, and that originally led them to send envoys to come to terms with the “reformer” Bashar al-Assad in Syria.

Emboldened regimes that have resorted to greater violence without any consequence. 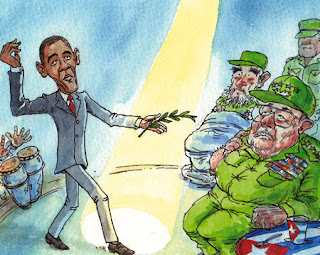