Dick Durbin Does Havana (for Caterpillar)

Last week, it was reported that U.S. Senator Dick Durbin (D-IL) was on a humanitarian mission in Havana seeking the release of American hostage Alan Gross.

Yet, sadly, it appears it wasn’t really a humanitarian mission.

It was to foment relations for the Illinois Farm Bureau and the Caterpillar corporation.

Fresh off his first trip to Cuba, U.S. Sen. Dick Durbin is calling for more constructive engagement with the nation that has been under an American trade embargo for more than half a century – something that could bring big benefits to Illinois agriculture and manufacturing […]

[Durbin] said that increased engagement in communications and trade would give ordinary Cubans “a chance to see what life in the West and life in America is all about.”

That, in turn, means “an economic benefit here as we increase trade to Cuba,” from grain to machines produced by companies like Peoria-based Caterpillar Inc.

“Caterpillar does very well all around the world… I have no doubt if the market were open” the company would be able to expand into Cuba and see solid sales there, Durbin said.

Durbin’s impressions match up with the interests of the Illinois Farm Bureau, which has long seen the potential of increased trade with Cuba and supports the resumption of normal trading with Cuba.

“Just because of its proximity to the United States, it offers a lot of opportunity,” said Chris Magnuson, the group’s executive director for operations, news and communications. 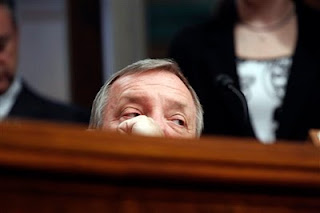