Who Benefits From “People-to-People” Travel?

In announcing his new “people-to-people” travel policy in January 2011 (despite an American hostage being held by the Castro regime), President Obama stated that the purpose of this policy was “to help promote [the Cuban people’s] independence from Cuban authorities.”

A well-intended goal. But the exact opposite has been happening.

Nearly every “people-to-people” trip approved by the State and Treasury Departments have included visits with Castro regime officials, government ministries and even its repressive organs (e.g. the “Committee’s for Defense of the Revolution” and the official censors at the “Union of Writers and Artists”).

Every single trip has been pre-approved by the Castro regime and includes official government “tour guides.”

“The U.S. company that arranged their tour, Insight Cuba, claims to be the largest provider of U.S.-government licensed travel to the island, and that means no days on the beach or nights at Havana’s Tropicana Cabaret. Instead, the group goes to hospitals, schools and historic sites, all with a tour guide appointed by the Cuban government in order to keep a pro-Castro spin on things.”

“Ludwig Diaz Monte­negro was a Cuban guide and government employee; I was an American tourist in the communist country.”

(Note to The Washington Post: Tourism to Cuba remains illegal).

Adding insult to injury, these “people-to-people” licenses are also being used as a backdoor for business groups to scout “future” deals.

Here’s the AP just a few days ago:

“Dozens of chambers of commerce across the country are also participating in trips beginning this spring. Nashville Area Chamber of Commerce members will tour Cuba in October on an excursion being organized by an outside agency.”

Meanwhile, a truly independent cultural group on the island, Estado de Sats, which sought to host a couple of “people-to-people” travelers (American poet Hank Lazer and musician Andrew Raffo Dewar) over the weekend, were prevented from doing so by Castro’s secret police.

“To accept the conditions imposed by the system is to help perpetuate totalitarianism in Cuba. Official channels are well articulated to not break a preconceived script.” 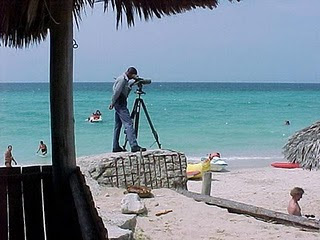