On Friday, February 24th 2012, exiled Cubans, ex-political prisoners, and human rights activists will be protesting in front of the Cuban Interests Section and at various other points in Washington D.C.:

· Because of the increased repression against pro-democracy activists in Cuba

· To commemorate all those who died in hunger strikes in Cuba’s political prisons like Pedro Luis Boitel along with the thousands of other patriots who have been assassinated by the Castro regime like the Brothers to the Rescue who were murdered in mid air while on a humanitarian search and rescue mission on February 24, 1996

Cuban exiles from Miami, New York, New Jersey, and Connecticut will be participating in the demonstrations (many of them ex-political prisoners). They will be dressed in black and carrying photos of some of those assassinated by the Cuban government. A coffin with the names of more than 10,000 victims will be displayed.

The demonstrations will begin at 10 a.m. in front of the Cuban Interest Section. Then, at 1:30 p.m., there will be a march down 16th Street to the White House, where a silent protest will be held from 2-4 p.m. Finally, from 4:30 to 8 p.m. the demonstration will move to Union Station, Washington’s main train terminal, where a film about the reality of the Cuban people will be aired.

Simultaneous demonstrations will also take place in other countries including but not limited to Canada, Venezuela, Chile, Italy and Spain. 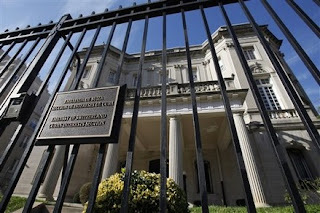 5 thoughts on “Tomorrow: Protest at the Cuban Interests Section in D.C.”