In an article in the Miami Herald yesterday, it was reported that the Cuban Interests Section in Washington D.C. will hold a meeting on April 28th with Cuban exiles in the U.S. it deems “respectful.” The exact description of individuals the Castro dictatorship deems worthy of inviting to this get together are Cuban exiles “who have respectful links to their country, being conscious of the need to defend its sovereignty and national identity.” In other words, only Cuban exiles who respect the criminal and totalitarian dictatorship of the Castro dynasty and have no interest in seeing, let alone advocating for, a free and democratic Cuba will be allowed to attend this soiree.

Meetings such as this are by no means unprecedented, they have been taking place since 1978. Unfortunately, there has never been a shortage of Cuban “exiles” willing to meet with, support, and commiserate with the very regime that forced them into exile in the first place. Some may view this strange behavior as some form of Stockholm Syndrome, where the oppressed unknowingly develop sympathies for their oppressors. But in reality, the condition that afflicts these Cubans willing to participate in friendly talks with the very same people who murdered tens of thousands of their compatriots, raped and pillaged their nation, and continues to enslave their fellow Cubans is a much less complicated one: Degeneration. However, I find the Spanish word most often used by Cubans to describe degenerates such as these much more eloquent: Sinvergüenza.

If we are all honest about it, that is what Cuban exiles who accept the invitation and the conditions stipulated by the Castro dictatorship for this so-called meeting really are: Sinvergüenzas. How else can you describe individuals who are willing to offer legitimacy and respect to a criminal organization as vile and murderous as the Castro government? Honorable men and women do not bow down and worship those who repress them, only sinvergüenzas do that. Honest and decent people respect human dignity, their own as well as that of their fellow citizens.  Sinvergüenzas, on the other hand, have no dignity, and therefore have nothing to lose by congregating with a vile cadre of murderers. As a matter of fact, sinvergüenzas live for opportunities such as this. These events provide them with a brief, decadent moment where their degenerate state is actually an advantage. While the official announcement from the Castro dictatorship may refer to them as “respectful,” let us not kid ourselves here. We all know who and what they are: Sinvergüenzas.

And if you are wondering just who these sinvergüenzas are, the Spanish version of the article in El Nuevo Herald provides us with a picture of one. None other than King Sinvergüenza himself, Carlos Saladrigas: 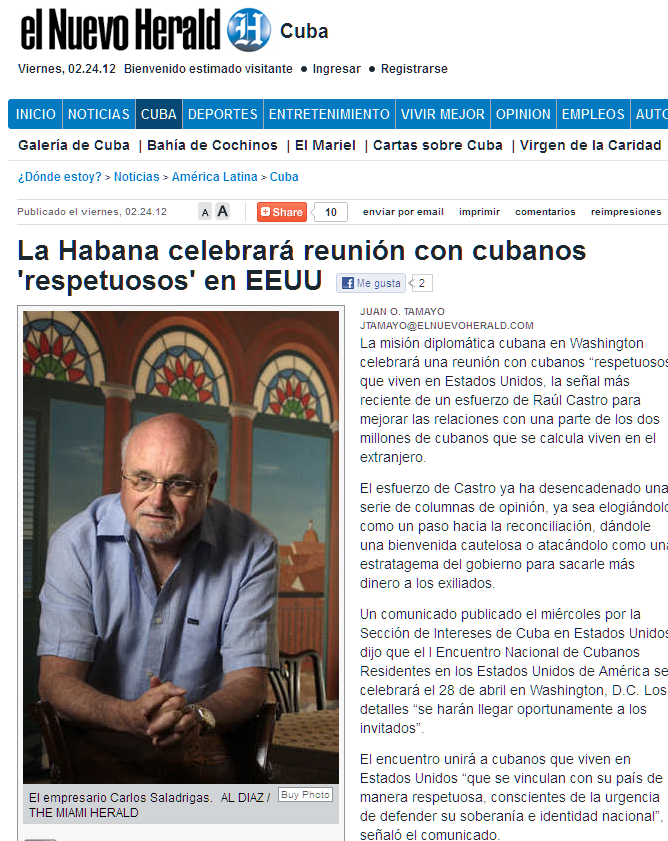 9 thoughts on “The Castro dictatorship and Los Sinvergüenzas”