Birds of a Feather: Castro and Lukashenko use similar repression tactics

“It was never the people who complained of the universality of human rights, nor did the people consider human rights as a Western or Northern imposition. It was often their leaders who did so.” – Mr. Kofi Annan, United Nations Secretary-General 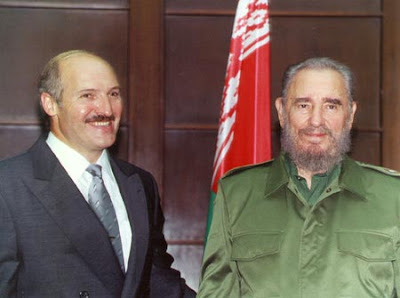 The dictator in Belarus, Alexander Lukashenko, has been called the “Fidel Castro of Europe” and in addition to close ties with the Castro brothers. Lukashenko has sent warm greetings on the anniversary of the Castro brothers arrival to power on January 1, 1959 declaring: “I am convinced that the warm and friendly relations, which have been in place between our countries and peoples for many years now, will continue to contribute to gradual development of the bilateral mutually beneficial co-operation between Belarus and Cuba in various spheres.”