Cuba’s Cardinal Jaime Ortega has dishonored the memory of all the courageous priests throughout Eastern Europe, Africa and Central America that have risked and even lost their lives protecting dissidents from tyrants.

Instead, he’s chosen the path of Cardinal Eugenio Pacelli (who later became Pope Pius XII), who signed the infamous Reichskonkordat between the Holy See and Nazi government, which solely guaranteed the “rights” of the Catholic Church in Germany.

According to the BBC:

Cuban dissidents who had occupied a church in Havana to demand an audience with Pope Benedict when he visits later this month, have been evicted.

The group of 13 want the Pope to press Cuba’s communist government on issues such as the release of political prisoners and an end to repression.

The protesters were removed from the Church of Charity in central Havana late on Thursday at the request of the city’s Cardinal [Jaime Ortega].

And almost simultaneously, according to the AP:

The Vatican says Pope Benedict XVI will be available should Fidel Castro ask to meet with the pontiff when he visits Cuba later this month.

Asked about a possible Fidel Castro-pope meeting at a media briefing Friday, Vatican spokesman the Rev. Federico Lombardi said that if Castro “wants to, the pope will be available.” Benedict arrives in Cuba from Mexico on March 26.

But not with Cuba’s dissidents, of course.

No wonder Castro’s Ambassador to the Holy See said yesterday that the regime and the Church are “speaking the same language.” 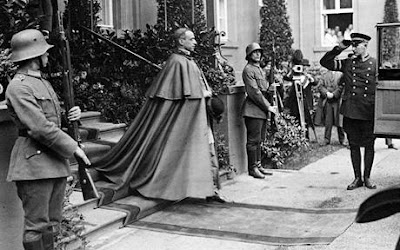