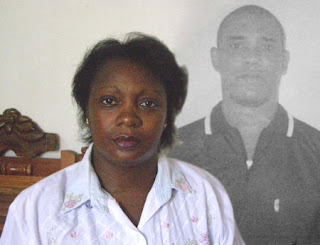 Berta Soler, the leader of Cuba’s Ladies in White, has been released from jail after being arrested by the Castro dictatorship’s State Security along with more than 70 other human rights activists over the weekend . Her husband, Angel Moya, a former prisoner of conscience who was arrested over the weekend as well, still remains imprisoned by the government and his whereabouts are unknown.

HAVANA – One of Cuba’s leading dissidents said Monday that she was released hours after being detained ahead of a weekly protest, but her husband was apparently still being held.

Bertha Soler, leader of the Ladies in White opposition group, said authorities have also warned her not to spoil Pope Benedict XVI’s visit next week.

She said she and three dozen supporters were taken into custody early Sunday when they tried to reach a Havana church to protest. About 30 more who arrived at the church were detained when they tried to march down streets where they don’t normally demonstrate.

Soler said most of the demonstrators were freed by late Sunday, but others were held overnight. She said she had not heard from her husband, Angel Moya, another anti-government activist who was arrested Sunday.

The detentions capped a tense week in which little-known government opponents occupied another Havana church for two days in an attempt to shine the spotlight on human rights ahead of the pope’s March 26-28 trip.

In spite of the Cuban regime’s intensifying repression as the papal visit draws near, Soler remains defiant and vows to continue the peaceful struggle for liberty in Cuba and respect for human rights.

Berta Soler, the leader of the Cuban Damas De Blanco, was released from jail early Monday morning, but not before the Castro dictatorship warned her and other Damas to stay away from events in Havana and Santiago when Pope Benedict XVI visits the island next week.

It will take a lot more than that to stop Soler, who along with several dozen other Damas were arrested during a weekend crackdown by the Castro police.

“They warned us that the space they had given us on Quinta Avenida was going to end, that we were not going to be able to go to (the church) any more,” Soler said. “That is something we are not going to respect, because it is our right … nobody can take that away.”

Meanwhile, Soler said the whereabouts of her husband, the former prisoner of conscience Angel Moya Acosta, who also was arrested, remained unknown.

7 thoughts on “Cuban Ladies in White leader released from jail”