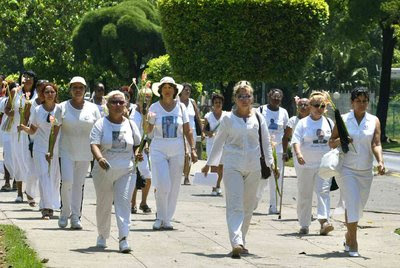 For the dictatorship of Fidel and Raul Castro, the visit by Pope Benedict XVI to Cuba next week has nothing to do with spiritual revival and everything to do with staging a theatrical performance for the world. A performance, they hope, which will portray their brutal regime as compassionate and benevolent. It is an interesting goal by a totalitarian government that in its quest to appear considerate and humane, has in the weeks leading up to the papal visit drastically stepped up its violent repression against peaceful human rights activists, and in particular, the Catholic Ladies in White.

The Castro government has invested millions of dollars preparing for this visit, which they hope will shine a positive light on their otherwise dark and vile regime. Leaving nothing to chance, they have made it known to Cuba’s human rights activists that protests of any type will not be tolerated and will be severely punished.

Cuba threatens to close down Ladies in White public protest

MIAMI — Cuba’s Ladies in White say the secret police have told them that they will shut down the only public protests allowed by the government anywhere on the island — the marches staged by the women after Sunday Masses in Havana’s Santa Rita church.

The threat came as police arrested more than 70 group members over the weekend and dissidents stepped up their activities as Cuba prepares for Pope Benedict XVI’s three-day visit to Havana and the eastern city of Santiago de Cuba, starting Monday.

The Ladies in White generally have been allowed to protest outside the Santa Rita church since mid-2010, when Cardinal Jaime Ortega interceded with the government after the women were accosted, sometimes lewdly, several times by mobs of government supporters.

Their Sunday marches after Mass at Santa Rita — where many churchgoers are foreign residents of Havana, along the grassy median of Fifth Avenue in the western neighborhood of Miramar — have been the only such regularly occurring protest in Cuba.

Police have cracked down harshly, however, when women tried to launch similarly peaceful marches elsewhere, including the cathedral in the city of Santiago de Cuba and the Basilica of Our Lady of Charity in El Cobre, both in eastern Cuba.