A very interesting and quite entertaining review of Fidel Castro’s memoir of Ché Guevara by Daniel Kalder in the Guardian:

Interested in the insider’s view of Che Guevara by his comrade-in-arms Fidel Castro? I wouldn’t look for it here if I were you 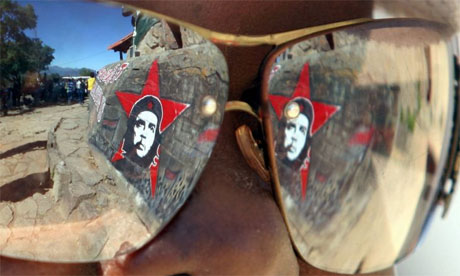 Although I have never worn a Che Guevara T-shirt, I have at least one thing in common with 99.999% of those who have: I don’t know much about the Princess Diana of revolution. Yes, the legendary guerrilla was charismatic, gifted and fought “imperialism” … but what else? Well, in 1962 he told the Daily Worker that if he had had control over the bombs at the centre of the Cuban missile crisis, he would have launched them. The triumph of socialism was worth “millions of atomic war victims”.

Che, then, could happily justify mass murder by invoking Marxist-Leninist flapdoodle. But what else can be said about the man behind the iconic photograph? Who better to consult than Fidel Castro, the long-serving dictator of Cuba (ret) and author of Che: A Memoir? Against overwhelming odds, the two men and assorted comrades overthrew the Batista regime and then started building a new country together. Dedication to propaganda notwithstanding, Castro might over the course of an entire book accidentally let slip a few candid details about his comrade.

Well, he might if it were actually a memoir, but Castro’s Che is a collection of official speeches and interviews with sycophants. The dictator is not to blame for the misleading title, however – that is the work of Ocean Press, the publisher.

The first 34 pages contain hero-worshipping introductory material. Attacks on Che and the authoritarian dictatorship he helped establish are dismissed by appeals to the authoritarian dictator, who is quoted in massive chunks of soul-rotting verbiage. The “memoir” proper begins on 3 October 1965 with a televised speech Castro delivered on the topic of Che’s disappearance from Cuba. Rumours were circulating that there was a split in the revolution, or worse. Castro blamed the conjecture on sinister external forces: “The enemy has tried to sow confusion, to spread discord and doubt, and we have waited patiently because it was necessary to wait.”

But why? Well, Fidel doesn’t tell us, because he is busy abusing the lying, infantile imperialists. Sadly, his invective is no great vituperator, à la Gaddafi; rather, he lifts his insults directly from the International Handbook of Revolutionary Socialist Style, alternating standardised demonisation of the enemy with preposterous self-sanctimony, eg: “Lies. Who has ever heard a lie from the lips of a revolutionary?”

2 thoughts on “Ché, Fidel, and their Marxist-Leninist Flap-doodle”