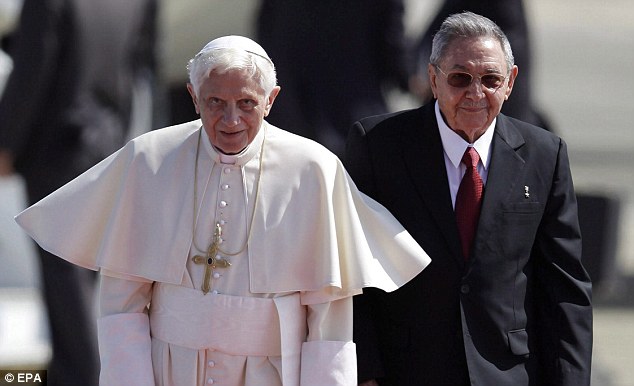 The much anticipated arrival of Pope Benedict XVI in Cuba took place yesterday and after much fanfare and speeches, the event ended up being nothing more than a celebration of banalities. The headlines last night and this morning all blared the pope’s call for Cuba to build a more open society and his pleas for more religious freedom on the island. But his pleas were all couched in banal and languid rhetoric aimed more at not offending his hosts and less at actually calling for true liberty and freedom in Cuba. Pope Benedict XVI’s approach was so timid that the AP opened one of its reports on the arrival by stating the pope was “taking a softer approach to the communist regime than his predessor did during his historic visit 14 years ago.”

The remarks of Cuban dictator Raul Castro upon the arrival of the pope only served to confirm this celebration of banalities. During his own speech, the Cuban dictator touted his regime’s respect for religious and political freedoms. This after Castro had launched a massive and brutal wave of repression throughout the island where hundreds of dissidents and human rights activists were intimidated, threatened, beaten, and arrested in the days and weeks preceding the pope’s arrival and throughout the day of his arrival as well. No doubt, Raul Castro was heartened and encouraged by the pope’s demure manner and had no concerns the pontiff would challenge his outright lie.

Unfortunately, the pope’s words and actions during his first day in Cuba produced no surprises. As much as we had hoped and prayed that he would take a principled and courageous stand for the oppressed Cuban people and the teachings of Christ, the pope instead delivered what we expected and feared: banalities. Throughout his arrival speech, there is plenty of veiled references to injustice and suffering, but there is no direct call for the freedom of the Cuban people. Niceties abound — a more open society, pray for the prisoners, pray for the sick, reconciliation — but sadly missing from the pope’s remarks are four simple and powerful biblical words:

8 thoughts on “Pope Benedict XVI’s first day in Cuba: A celebration of banalities”