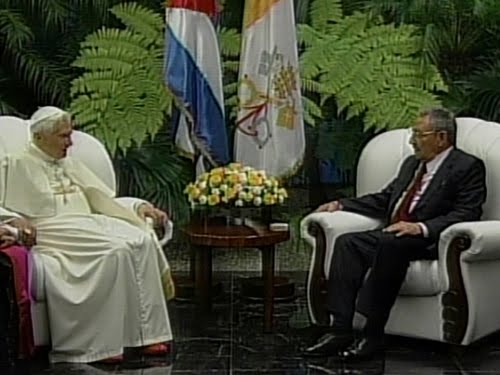 Today is the last day of Pope Benedict XVI’s visit to Cuba. And today is the pope’s last chance in Cuba to be a shepherd to his flock and offer them protection and hope.

Before his arrival on Monday, many of us held out hope and offered much prayer that the pope would stand up for Cuba’s oppressed people and stand up to the Castro dictatorship. Instead, with only hours remaining in the pope’s visit,  all we have received is much disappointment and disillusionment. This is not to say we expected anything different, but it is to say that we hoped, we prayed, we pleaded with the pope for something much more substantial.

Yesterday, Pope Benedict XVI had a private meeting with the murderous and atheist Cuban dictator Raul Castro. Other then the pope and Castro, no one knows what was said at that meeting. What we do know for certain is that the pope has said absolutely nothing, not one word, has not even turned his head to offer a momentary glance to the Ladies in White or any other dissidents. Today, the pope is scheduled to meet with retired dictator Fidel Castro, another murderous atheist. Again, we do not know what they will talk about. However, we can be quite certain there will be no meetings with the Ladies in White or other dissidents since the pope has outright refused to meet with them.

It should be noted that the pope has not squandered any opportunities to pay lip service to the Cuban struggle for freedom. Like a seasoned politician, he has made general statements designed with the intention of neither offending the offenders, or completely abandoning the abandoned. But the pope is not a politician, he is supposed to be the representative of Christ here on earth. He should be emulating Christ who spoke the truth, regardless of how others might take it. It is impossible to take lip service seriously and the Castro dictatorship proved that beyond a doubt. The Cuban regime did not even wait for the pope to depart the island before absolutely and unequivocally repudiating his tepid request that the regime abandon Marxism and embrace democratic reform.

Today is the last day for Pope Benedict XVI to emulate Christ in Cuba. It is his last opportunity to turn over the tables of the money changers in Cuba. It is his last chance to tend to his flock, to the sheep that the Castro regime has led to slaughter for more than five decades. The pope has only hours left to offer the Cuban people hope, the knowledge that they are not alone, that they do not suffer in silence.

Unfortunately, I am afraid that the pope’s last hours in Cuba will be no different than his last two days in Cuba. We prayed for hope and all the pope delivered was disillusionment.