While hundreds of democracy activists were being violently being beaten, dragged and arrested throughout Cuba, the Archbishop of Miami, Thomas Wenski, celebrated a Mass in Havana for 300 Cuban-Americans that paid over $3,000 per person for a VIP tour.

But it wasn’t the visual of the Archbishop with his VIP contingent that was the most troubling — though it’s worthy of the worst of stereotypes that have plagued Catholic hierarchies in Latin America for decades.

It was his political theory.

Archbishop Wenski lobbied for the luxury of patience and a “soft-landing” in Cuba — as if 53 years of a brutal dictatorship were somehow insufficient time.

Ironically, Wenski preached this political model during a homily, which the Church had previously argued was purely for pastoral purposes; and thus, its “inability” to meet and support defenseless dissidents.

(Correction: Since writing this post, the Vatican has clarified that it didn’t meet with dissidents out of respect for their tyrannical hosts).

So much for that excuse.

Bewilderingly, for people that claim to be “in-tune” with the reality of regular Cubans on the island, these comments are remarkably out of touch.

Any Cuban on the street will tell you that they want immediate political and economic change — particularly if they feel safe enough to tell you the truth.

As a matter of fact, recent polling data suggests that well over 80% of Cubans desire immediate political and economic change.

Who doesn’t want immediate political and economic change is the Castro dictatorship — and now apparently the Catholic Church.

For those not familiar with Shushkevich, he was one of three people (along with Boris Yeltsin and Leonid Kravchuk) who signed the historic Belavezha Accords, which dissolved the Soviet Union in 1991.

Asked if he believed in gradual transitions — or “soft-landings” as per Wenski — Shushkevich was skeptical.

Even more skeptical was Soviet scholar Fredo Arias-King, editor of the academic quarterly “Demokratizatsiya: The Journal of Post-Soviet Democratization,” who accompanied Shushkevich and recalled that the most successful transitions to democracy were also the most radical, e.g. Estonia, Czech Republic.

Then, there’s the overall theme that was repeated — over and over — by both the Archbishops of Miami and Rome: Reconciliation.

Sounds beautiful, but here’s the question:

Why the misplaced obsession with reconciliation, as opposed to its prerequisite — freedom?

We stand firmly in support of the reconciliation of all Cubans of good-will — regardless of race, creed, gender, political or economic status.

But reconciliation requires the will of free people.

Moreover, no one has the slightest doubt that free Cubans will join their skills, talents and resources to build a democratic and prosperous nation. We’ve done it throughout history.

There’s only one obstacle currently standing in the way of reconciliation — a violent and obtuse dictatorship.

And that is not the path to reconciliation. To the contrary, it’s the morally unacceptable path to further alienation.

Just ask the Ladies in White and the courageous pro-democracy leaders who were denied “a minute” of the Pope’s time.

Blessed are those who are persecuted for righteousness’ sake, For theirs is the kingdom of heaven. Matthew 5:10-12 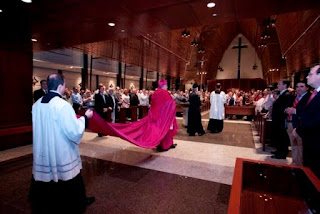 2 thoughts on “An Elitist Archbishop”