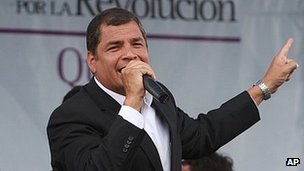 President Rafael Correa of Ecuador says he will boycott this month’s Summit of the Americas in Colombia because Cuba is not invited.

Mr Correa announced the move in a letter to President Juan Manuel Santos of Colombia.

He called Washington’s veto of Cuban participation “intolerable”, saying its exclusion was not by consensus.

US President Barack Obama is among regional leaders due to attend the summit, held every three years.

“After some reflection I have decided that while I am the president of Ecuador, I will not attend any Summit of the Americas until it begins to make the decisions required,” Mr Correa said in his letter.

“There has been talk of lack of consensus, but we all know that this is the veto of foreign powers.”

So far, Mr Correa is South America’s only leader to confirm he will not attend the meeting, which opens in Cartagena on 14 April.