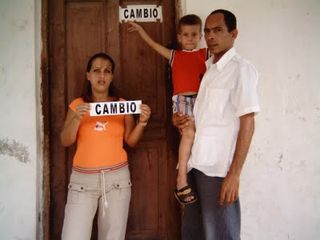 Dr. Darsi Ferrer, a Cuban dissident who has suffered beatings and imprisonment at the hands of the Cuban government, has announced on his Facebook page that his family, who have also been targets for brutality by Castro political police, will seek political refuge in the U.S.

To all my friends, today I share the news that tomorrow at 3 pm, my wife Yusnaimy and our son Dariel will be flying to Miami. They will spend the night there and leave for Tennessee the next day where a place for them to stay has been arranged by the political refugee program. Perhaps you know that Yusnaimy is ill and suffers cerebral vascular issues, which has caused, among other complications, serious instances of intracranial hypertension. Here, they have not even diagnosed the problem, and neither does she have the opportunity to receive adequate treatment. I hope they will be able to greet all of you.

2 thoughts on “Family of dissident in Cuba to seek political refuge in the U.S.”