A very timely and necessary message for the supporters of the Cuban dictatorship here in the U.S. who believe a slave can reconcile with his master and remain a slave.

From 1959 to this very day, each generation of Cuban exiles has consistently opened their homes, schools and businesses to the most recent group of arrivals — irrespective of their previous social status or political beliefs.

But that didn’t stop Cuban-American businessman Carlos Saladrigas, delivering remarks in Havana last Friday, from disparaging Cuban exiles as “hysterical” and lecturing that:

“There’s no other road than that of reconciliation, respect, inclusion, dialogue, love and peace.”

Not surprisingly, Saladrigas’s remarks raised eyebrows among dissidents on the island, including Ivan Garcia, who was present and later wrote:

“It caught my attention that [Saladrigas] didn’t question the hundreds of arrests of dissidents during the German Pope’s trip or the beating of the man that spontaneously screamed ‘Down with Communism’ at the Plaza Antonio Maceo of Santiago de Cuba.”

Meanwhile, another dissident, Miriam Celaya, questioned why Saladrigas presupposes a “collective responsibility” among all Cubans for the crimes of the dictatorship.

None of this is new.

The strategy of “reconciliation without freedom” is more than three decades old.

It was initially contrived by the Castro regime in the 1970’s as a way to discredit and divide the Cuban exile community — its most persistent source of opposition — while providing the regime with the ultimate guise of legitimacy.

Back then, the exile proponent was also a Cuban-American businessman, Bernardo Benes.

“I think, as I’ve thought since 1971, that Cubans here and there should bury the hate to produce a reconciliation of the Cuban nation,” Benes told the Chicago Tribune.

What Saladrigas conveniently overlooks today — similar to Benes 30 years ago — is that freedom is a prerequisite for reconciliation.

“Only free men can negotiate; prisoners cannot enter into contracts.”

So it’s no surprise that only self-appointed “leaders” with no constituencies would be insulting enough to propose “reconciliation without freedom.” 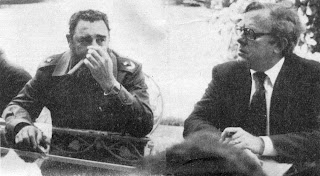 2 thoughts on “In Cuba, there is no reconciliation without freedom”