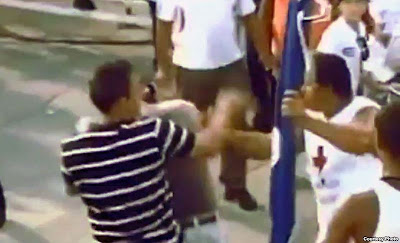 The entire incident was caught on video. A Cuban Red Cross volunteer supposedly tasked with providing medical aid to people attending the papal mass in Santiago de Cuba viciously punching a courageous protestor and beating him with a folded stretcher. It took days for us to find out the name of that protestor (Andres Carrion Alvarez), and it has taken even longer to find out the name of his Red Cross assailant.

But now we know.

Via ASOPAZCO, we learn that his name is Juan Alberto Rojas Sangredo. He leads one of the Castro dictatorship’s infamous and violent repressive groups known as Repudiation Brigades, mobs which are deployed often by the government to brutally attack dissidents. At one time, he was a bodyguard for the murderous Commandant Ramiro Valdes, one of the regime’s most prolific killers. And if that were not enough, he was also awarded the Order of Che Guevara for his outstanding work torturing political prisoners in both Villa Marista prison and 5 de Luis Lazo prisons.

Welcome to internet, Juan, where you will live in infamy for ever and ever. Now the entire free world knows your name and exactly who and what you are, and there is nothing you can do about it.