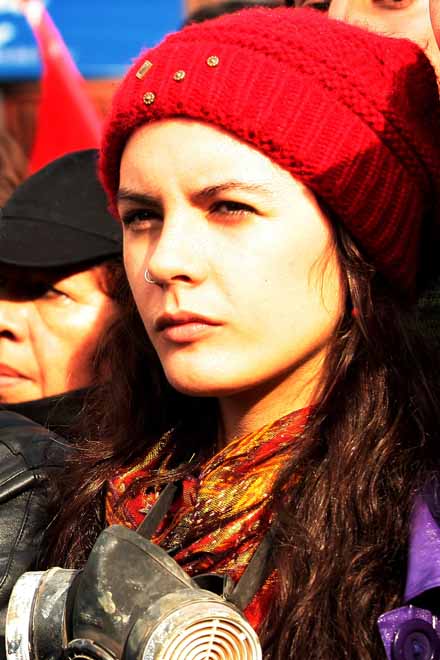 From Cuba, musician and actor Ismael de Diego has written an open letter to Chilean communist student leader Camila Vallejo who is on the island for a communist youth conference.

An excerpt from cubaencuentro (my translation):

[…] In Latin America, there exists an unconditional fascination with the Cuban Revolution for the most part because of the ignorance regarding out reality. That is thanks to the effective silencing of our ability to make public denouncements all these years, and perhaps because of the generous attitude the government of Cuba shows to those on the outside. I have noticed the tendency to idealize our system, maybe because during all those years your groups were persecuted for ideas that seem to materialize themselves here, perhaps creating a romantic illusion of justice. But you should also know that this dictatorship credits itself and justifies itself to the people because of this complicity, and the blind innocence of many who support this government without making essential questions, without making the truth paramount, gives them credibility.

Therefore, I ask that you not allow yourself to be sweet-talked by smiling faces and that you ask questions. Ask about the UMAP, about strict control over everything, about the “acts of repudiation” from yesterday and today, about the rapid response brigades and the heightened alert status of the “vigilant” members of the CDR and their sinister “verifications,” all without much television glamor, but with the same cost in human life. And since they may actually give you an answer, please ask about that desperate man who yelled out alone, not during a protest but alone, a couple of opinions during a Mass celebrated by the Pope in Santiago de Cuba and was viciously beaten with fists, not water cannons, and disappeared. As of today, no one knows where he is. And when you have some answers that you find satisfactory, ask yourself, for me and for millions of Cubans who want to know, if things could have been different.

The complete letter (in Spanish) is available HERE.