Contrary to popular belief and the constant propaganda assault by the “Cuba Experts,” the so-called “self-employed” in Cuba do not have all that much “self” in their lives. Although the Castro dictatorship likes to refer to them as “self-employed,” and the media continually quotes “Cuba Experts” who happily promote that notion, the reality is that in Castro’s Cuba, there is no such thing as “self.” Everyone must and will do as they are told by the dictatorship, regardless of the latest euphemism attached to them.

The Not So “Self-Employed” Workers

The Castro regime has announced that its “self-employed” workers will be required to march — along with state workers — in the annual May Day parade.

These are the same “self-employed” workers that the media misrepresents as private business owners, when in fact they are simply lessees of the Castro regime — with no ownership rights whatsoever.

Now, they are being required to march with the Castro regime’s official labor union, the Conference of Cuban Workers (Conferencia de Trabajadores Cubanos, CTC).

(Remember that independent labor unions are illegal and repressed in Cuba.)

The Castro regime has also revealed that of its current 300,000 “self-employed” workers, 235,000 of them did not previously belong to the CTC.

Thus, the state’s official labor union has now increased its ranks thanks to non-state workers. 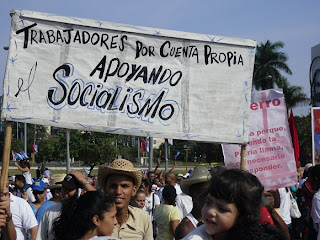