Capitol Hill Cubans spreads a liberal dose of reality on the dung sandwich that is the “Free the Cuban 5” campaign:

The Truth About the “Cuban Five”

Once again, there’s an intensified effort to rewrite history regarding the case of five Cuban spies tried and convicted by U.S. federal courts (with no Cuban-American jurists or jurors) in 2001.

Originally known originally as the “Wasp Network,” they are now referred to as the so-called “Cuban Five.”

For years, in pursuit of their propaganda efforts, the Castro regime has tried to make them a cause celebre.

This week, its U.S. mouthpieces purchased a full-page ad in The Washington Post.

They try to propel the fiction that the mission of the “Cuban Five” was simply to monitor the activities of supposed “anti-Castro terrorists” in Miami.

Now, let’s look at the facts (courtesy of the Office of the National Counterintelligence Executive):

In 1995, after obtaining FISA (Foreign Intelligence Surveillance Act) Court approval, the FBI obtained warrants to surreptitiously search apartments and monitor telephone communications by a group of Cubans who were Cuban intelligence operatives. The group, through its principal agents or illegal officers, communicated directly with the Cuban Government about its activities and received specific missions and taskings from the Cuban Government. The instructions were subsequently relayed to the other members of the spy ring as appropriate.

During the searches, the FBI uncovered and read the contents of the communications from and to the Cuban Government. This information was concealed in hidden files on computer floppy diskettes kept in the residences of three of the principal agents.

At Cuban Government direction, the Cuban spy ring collected and reported information on domestic, political, and humanitarian activity of anti-Castro organizations in the Miami-Dade county area; the operation of US military installations; and other US Government functions, including law enforcement activity. The spy ring also carried out tasks in the United States as directed by the Cuban Government, which included attempted penetration of US military installations, duplicitous participation in and manipulation of anti-Castro organizations, and attempted manipulation of US political institutions and government entities through disinformation and pretended cooperation. The spy ring received financial support from the Cuban Government to carry out its tasks.

An analysis of the communications used by the spy ring revealed that they spoke and addressed each other and their agents as representing the Cuban Government. They referenced decision-making “by the High Command,” referred to individuals as “comrade,” and used names and abbreviations associated with Cuban Government organizations. Communications between the members also referenced the “Intelligence Information Department”; “C.P.” for centro principal or headquarters; “MINIT” for Ministry of Interior—which administers the Cuban Directorate of Intelligence or DI; and “DAAFAR,” a known abbreviation for the Cuban Air Force Command. They also used jargon and abbreviations such as “S.E.E.” (Servicios Especiales Enemigos) that refers to the FBI or CIA.

The spy ring members paid great attention to maintaining secrecy as to their identity and mission and took elaborate steps to evade detection. They called themselves “La Red Avispa”—The Wasp Network. They used code names, including “Giro,” “Castor,” “Lorient,” “Vicky,” “Franklyn,” “Allan,” “Manolo,” “Judith,” “Mario,” and “Julia.” They spy ring also used false identities, including assuming the name, date of birth, and social security number of a deceased person. The ring is viewed as the largest Cuban espionage operation uncovered in the United States in a decade.

On the basis of its investigation and surveillance, the FBI had identified three individuals as the spy ringleaders by 1998. The first was Gerardo Hernandez who had oversight for infiltrating his subagents into US anti-Castro groups in the Miami area. The second leader was Ramon Labanino whose primary task was to penetrate and report on US military installations and activity in the South Florida area, including the Southern Command and the Boca Chica Naval Air Base in KeyWest. The third leader was Fernando Gonzalez, who took over Labanino’s responsibilities, including meeting with subagents when Labanino was tasked with Cuban Government missions outside the Miami area.

Hernandez and Labanino received reports from, and provided payments to, their respective subagents and tasked their subagents based on instructions they received from Cuba. Ricardo Villareal and Remijio Luna also exercised managerial or supervisory functions over subagents at times, but both men left the United States for other operational assignments.

Among the many communication topics between Hernandez and Cuba or his subagents were:

• The infiltration of the US Southern Command headquarters in Miami—according to Cuba, “one of the new prioritized objectives that we have in the Miami area.”

• The activities of Cuban exile groups in Miami and tactics to disrupt those groups by, among other things, “creat(ing) animosity” between specified groups and attempting to discredit certain individual leaders.

• The activities at the Boca Rica Naval Air Station as well as reports on an apparent military topic identified by Cuba that “continues to be of great importance to our comrades at DAAFAR.”

• The manipulation of the media, political institutions, and public opinion, including using anonymous or misidentified telephone calls and letters to media and political figures.

• Specific security precautions to be undertaken to avoid detection.

You can read the entire nine-page summary here. 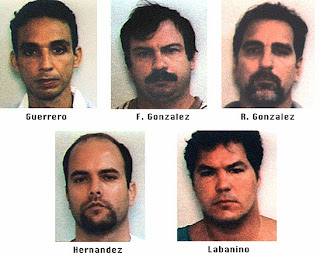 2 thoughts on “A dose of reality regarding the ‘Cuban 5’”